Lonar Crater Lake is one unique spot that intrigues even the NASA Scientists.

I had been planning a visit to Lonar Lake since some time but the plans kept clashing with something else always. A trip finally materialized recently.

Located in Buldhana district of Maharashtra near Aurangabad,  the 1.8 km diameter Lonar crater was formed some 50-52000 years ago by the impact of a speeding meteorite that hit earth at unimaginable speed. The impact was so strong that the lava was splashed at the periphery of the meteorite forming igneous rocks all around. The impact also created a sulphur spring. Over the years with rain water collecting in the crater it became a crater lake with sulphur spring within it. The lake is 1.2 kilometer in diameter and some 450 feet below the crater rim.

When I reached the MTDC Resort, the only stay option at Lonar, I luckily found a guide who out of sheer passion doles out information which he has learnt and collected over the years. A farmer, Rajendra Rathod is keen learner and takes pride in guiding the interested people.

It was good decision to hire the services of guide as he took me down a rocky pathway through the jungle to the banks of lake and few ruins of centuries old temples on the edge of lake. The pathway is not well laid and is more like a trek along the slightly steep hill side. I was breathless climbing up and down 450 feet along the crater surface to and from the lake side. (Read more on Treks near Pune here)

While leopards and monitor lizards have been spotted quite often, I came across a large centipede and two spiky needles of porcupine only. (Read about the Olive Ridley Turtles in Maharashtra here)

There are many tree stumps along the lake that seemed to have died because of lake water some years ago.

However the lake is shrinking thanks to yes of course the irresponsible villagers and local visitors who throw garbage while visiting the temple at the lake edge. With no steps taken by Maharashtra Tourism Board to maintain such a unique place on earth, who knows when this National Geo-Heritage Site will be forever lost to us.

Watch the local guide Rajendra conduct a simple test with help of turmeric and lemon to prove alkalinity of lake water. The lake water turns red as the turmeric reacts with alkaline water. The again make the water neutral the guide squeezes acidic lemon juice and the water turns neutral like the plain water.

Would you believe that the lake smells like rotten eggs?  The lake water has high content of Hydrogen Sulphide which imparts it the peculiar smell. As I walked along the edge of lake, I had to cover my nose till the time I became accustomed to the smell.

The algae feeds black winged stilt birds that come to wade in lake water. The algae is also source of some medicines. 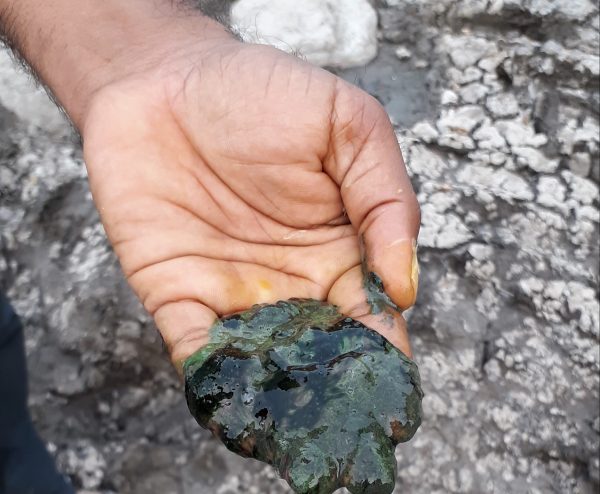 Blue green algae of the lake

The guide showed me a pumice stone which is porous and can float on water besides the magnetic rock.  There is also abundance of iron particles in the soil around the crater. When the guide ran a clean magnet over the soil, many particles clung on to it. It was quite a surprise to see the stone dust getting attracted to a piece of magnet and proved presence of iron particles.

Rocks around the crater 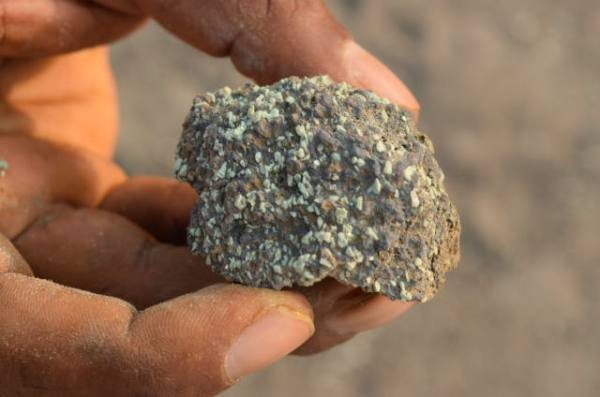 There are some ancient temples near the lake. Most are in ruins over the years having caved in and are buried in dust. A few in the area, though in bit broken condition, still attract the local villagers. One of the temples is a Hanuman temple. The heavy ancient idol that now lies prostrate has been carved from highly magnetic rock from the crater. 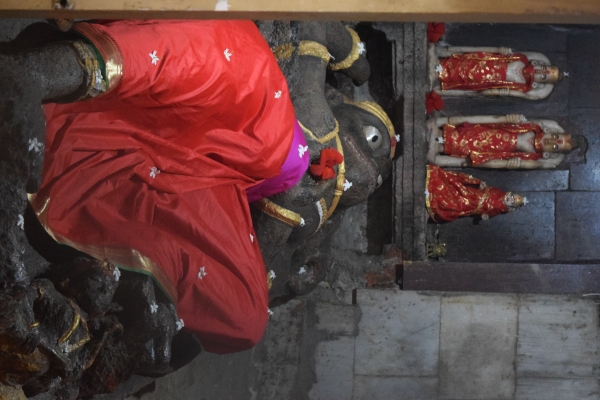 Another temple dedicated to goddess is popular with villagers who visit for every festival.

Other temples around the crater 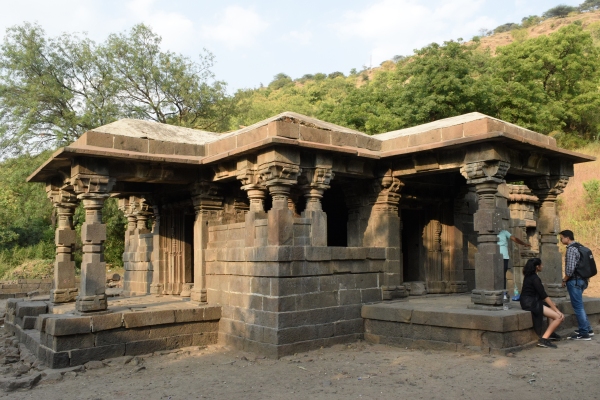 Ruins of temple that caved in