A UNESCO World Heritage Site, Brihadeshwara Temple or ‘Periya Kovil’ built by Rajraja I in 1010 AD is the largest and tallest temple in the country at Thanjavur, Tamilnadu.

It is one of the three ‘Great Living Chola Temples’, with the other two being Airawateshwar at Darasuram   and temple at Gangaikondacholapuram.

Thanjavur or ‘Tanjore’ as it was known earlier is located in the Cauvery river delta in Tamilnadu. An important religious, cultural, art and architecture centre, Thanjavur blessed with a fertile land is also known by the epithet ‘Rice Bowl of Tamilnadu‘.

Famous for the gold-leaf, gesso and glass bead ‘Tanjore Paintings‘ and the dancing clay dolls, Thanjavur became prominent during Chola reign as state capital of dynasty. Chola kings were patrons of art and architecture and contributed temples and palaces throughout their kingdom.

The Periyar Kovil which later came to be known as Brihadeshwara Temple during Maratha rule got the moniker of ‘Big Temple’ for its size.

I was visiting the ‘Big temple’ at Thanjavur. The old knowledgeable guide Raja enlightened me “Lord Shiva is ‘Brihat + Eeshwaram’ or the biggest God” and hence the name ‘Brihadeeswara’.

Just a glimpse of ‘shikhara’ of this temple jutting out much over and above the trees intrigued me enough to brave the scorching sun and walk bare foot from the parking across the road through the honking buses, speeding cars and two-wheelers that have blurred the memory of the ancient temple town.

Walking past the flower sellers, I entered through the ornate ‘Keralaanthakan gopuram’ a large arched gateway into an austere fort like enclosure just to be greeted with another huge gateway, the ‘Rajaraja gopuram’, flanked by two 15 feet gigantic monolith ‘dwarpalas’ or guards carved out from pinkish granite. 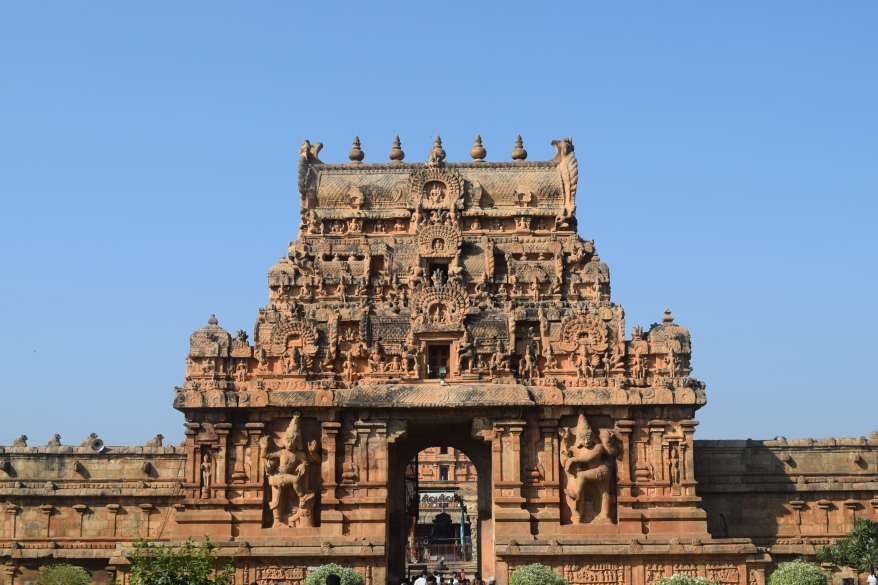 The mythology tells how Lord Shiva had to settle an altercation between Lord Vishnu and Lord Brahma, both of who wanted to be known as supreme God.  Shiva assumed the form of ‘Lingodbhav’, an incomprehensible column of fire to establish supremacy and quash the ego of other two bickering gods.

Stories such as these from mythology dot the external wall of the temple. Enormous sculptures like six feet tall idols of ‘Ashta-Dikpaalas’, the guardians of eight cardinal directions, a rather delicate representation of Goddess Mahishasurmardini, Kartikeya and other forms of Shiva make the external walls of the main shrine. A row of ‘Yalli’ the mythical creature also adorned the wall.

The grandeur and gargantuan scale of Brihadeshwara temple is evident right from the moment you step in through the first gopuram. The main shrine with 16 storied ‘vimana’ that ends into a 20 ton capstone, rises up to the stupendous height of 198 feet.

An enormous ‘Nandi’ bull 13 feet in height carved out of single stone sits facing the temple under a pillared stage. 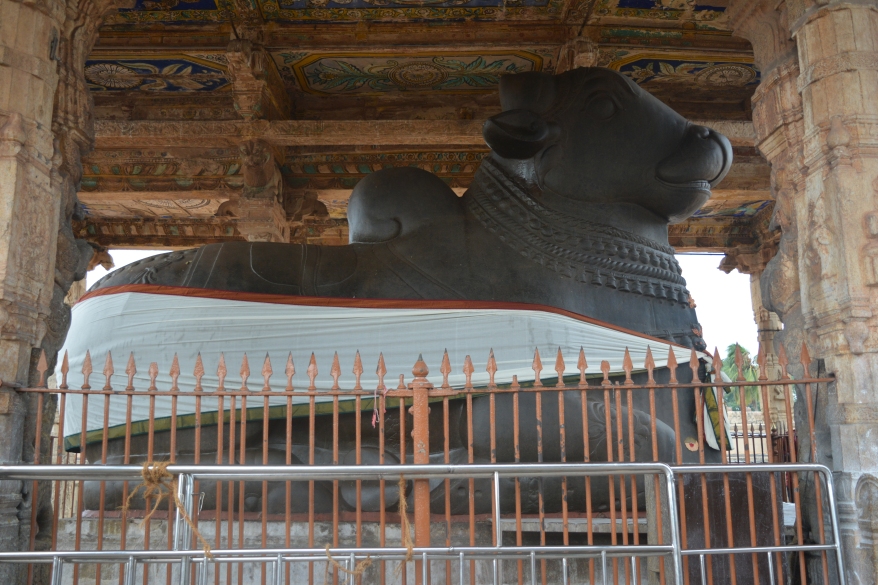 As I joined the queue to join thousand other devotees seeking the benign presence of Shiva in the inner sanctum, a whiff of strong incense overpowered me and the hum of chanting made me forget everything. I was awed with the larger than life austere interiors. The queue snaked laboriously and finally I stood facing the 29 feet Shiva lingam, largest of its kind.

The guide enlightened me on importance of numerical figure of 108 in Hindu mythology drawing my attention to as many ‘shiv lingas’ that lined pillared porticoes. The ceilings and walls were also adorned with fading frescoes that displayed scenes from ‘Ramayana’ and ‘Shiv Purana’. 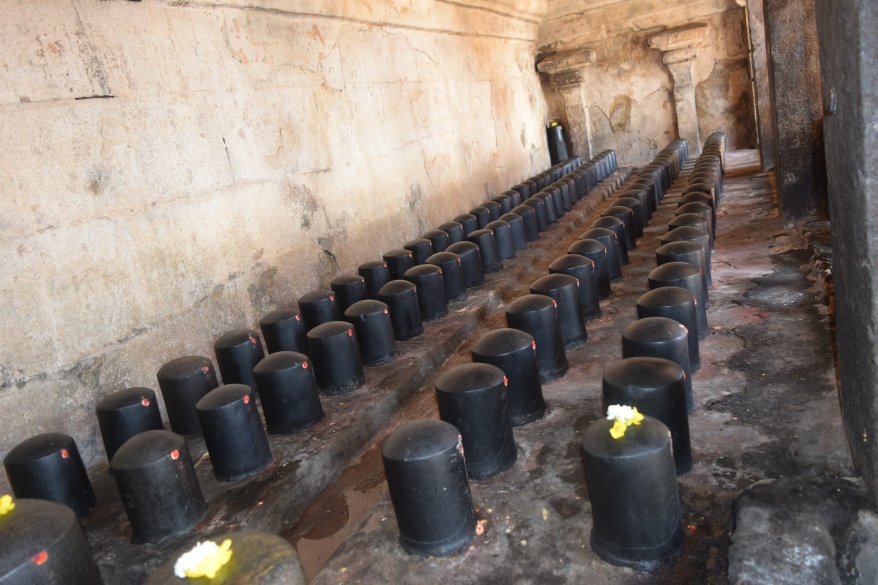 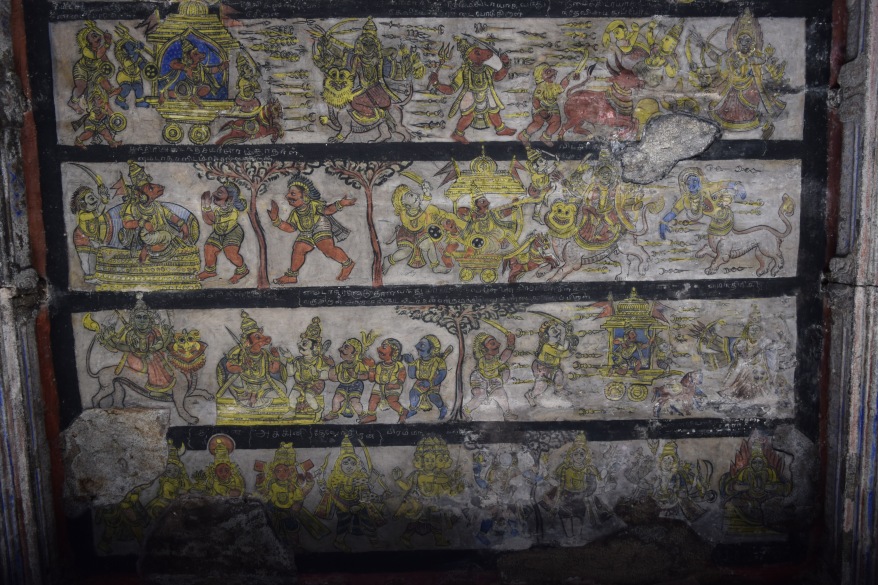 The temple hosts various cultural activities all around the year with devotees performing ‘Bharatnatyam’ and other dances in honor of Lord Shiva. Brahan Natyanjali every February is much awaited event among the artists and art lovers. 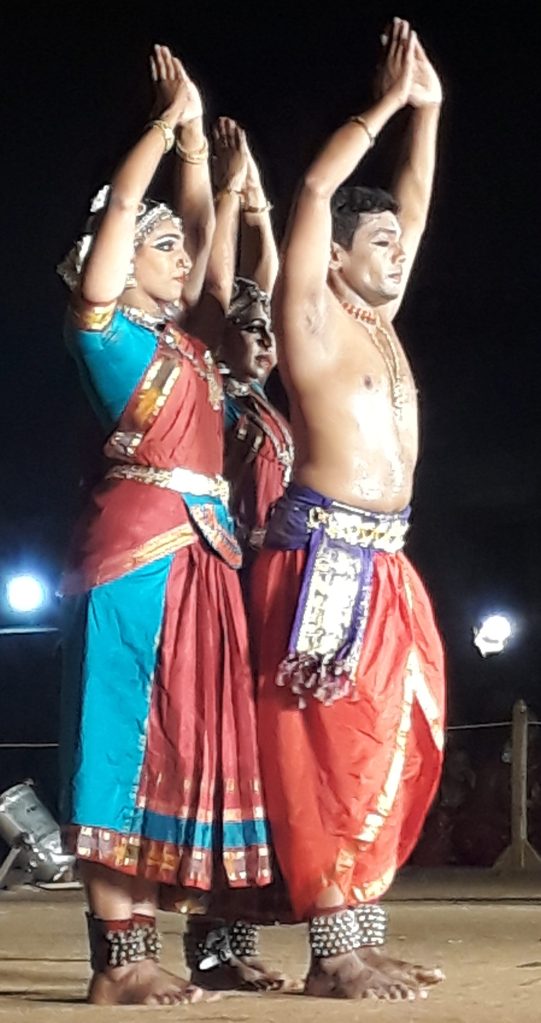 During the three day celebrations of  Pongal, the temple is decked up and resplendent with tiny lights enhancing its beauty.  For the ‘Mattu Pongal’ that is celebrated  a day after Pongal, the stone ‘Nandi’ is adorned with tons of fresh fruits and vegetables and special ‘yajna’ dedicated for well-being of cattle is performed. 108 cows and bulls are worshiped and fed in the premises. The sport of bull chasing, ‘Jaliyakuttu’ follows in villages later in the day. 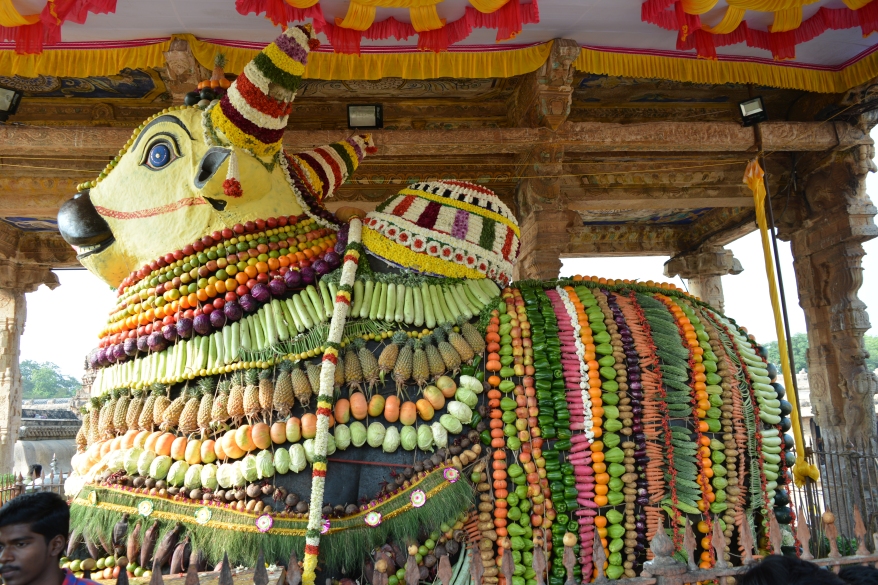 Tonnes of fruits and vegetables

Everything about Brihadeshwara temple dedicated to Lord Shiva is unique, colossal and grand scale.

While in Thanjavur I had the opportunity to visit the temple several times and each time I returned humbled, awed not only because the serene, and pious effect that the temple has on you but also because of the human capability to build something so majestic and humongous with the most simple tools and techniques.

It only proves that if we set our mind to a task , we can move mountains and achieve every possible thing.

More Things To Do In And Around Thanjavur

Where To Stay And Eat: 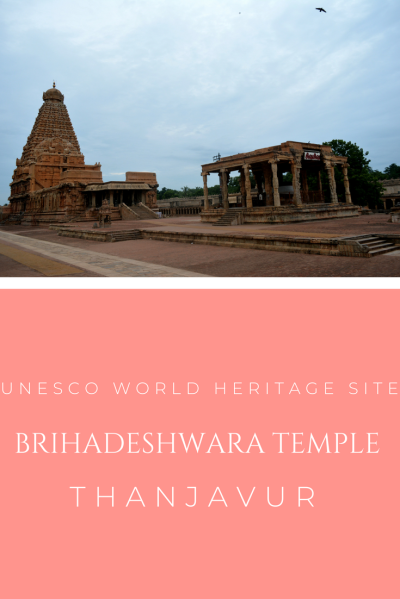