Kodiakkarai, the south-eastern tip of Cauvery River Delta in Nagapattinam district of Tamilnadu where the Palk Strait meets Bay of Bengal is internationally known as Point Calimere, a name given by Portuguese traders who settled there establishing trade relations with Chola Dynasty in 16th century.

Having visited the three living Chola temples around Thanjavur, I was mulling over more things to do for the weekend. It is then that a suggestion to visit Point Calimere Wildlife and Bird Sanctuary seemed quite appealing to me.

On route to Kodiakkarai, lies the Muthupet mangrove forest, which makes for one part of sanctuary’s three natural habitats. We set out on a road trip early morning to fit in a boat ride through the mangrove before putting up camp at sanctuary. Reaching the mangrove, we were accosted by some boatmen each wanting to take us in his boat. The boat ride costs 1500 Rs for an hour per boat.

Boatman Murugan, had a house just on the edge of lagoon and had a large space where we could park the car. He was our obvious choice. Soon we boarded the boat but instead of the older boatman it was his sons who sat on the helm. Though the language was a barrier in our communication but the two young boys seemed extremely confident and happy in handling the large wooden boat. 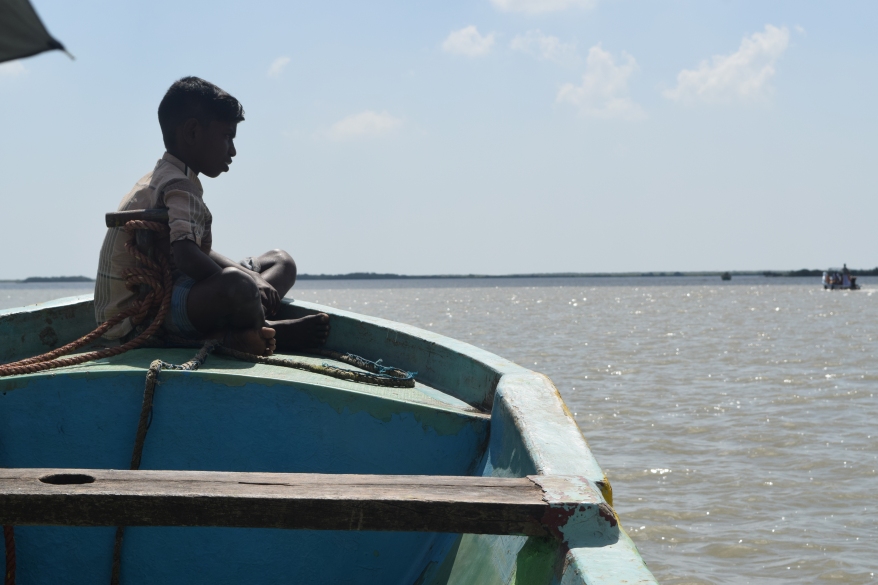 Younger boy of the boatman 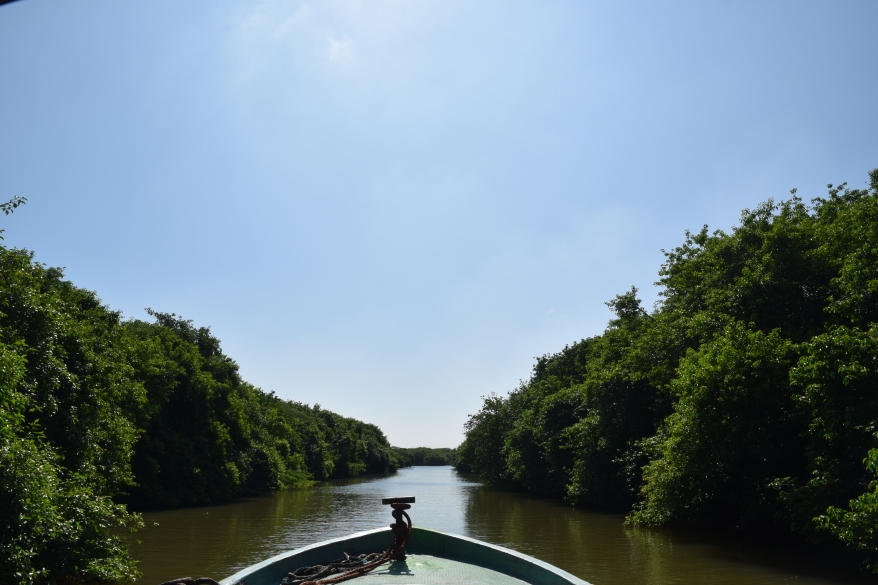 Sailing through one of the stream at mangrove forest

Narrow rickety paths made of slats of coconut tree trunk were laid out between the trees that ended into small platforms for the adventurers to sit and enjoy the sight of distant sea. The slat were broken at places and threatened to cave in into the slushy muddy bottom of groves. I did cross my fingers and venture on it though. 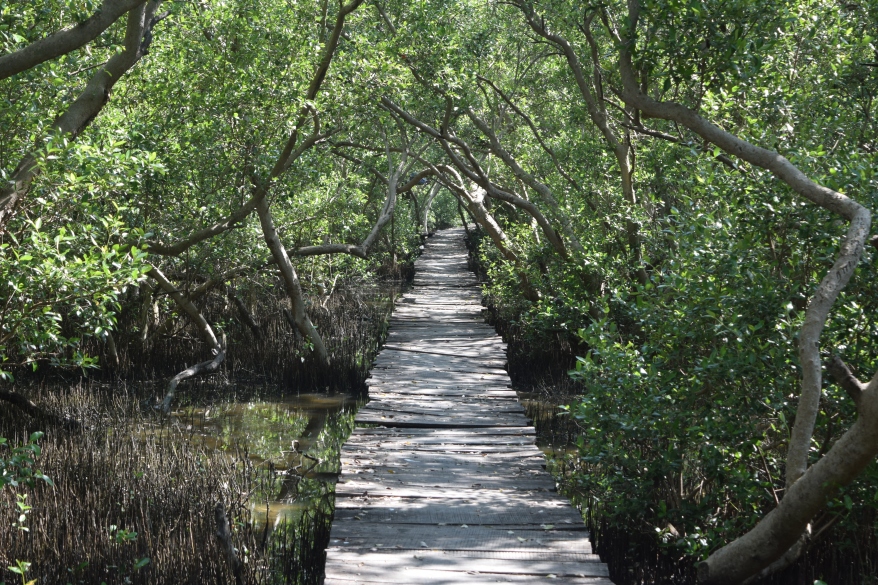 With sun rising high up in sky,we cut short our boat ride through the mangrove and set out towards the sanctuary. It was almost late afternoon by the time we reached the sanctuary and our chances of spotting wild life was quite diminished. We nevertheless took a jeep ride with a naturalist accompanying us on the designated route.

The core of sanctuary is inaccessible to tourist unless a prior permission from the forest warden is procured. The sanctuary is bordered by sea and has three natural habitats; the mangroves, wetlands with salt pans and dry deciduous forest known as Vedaranyam.  Created in 1967 for conservation of black buck antelopes, the sanctuary is spread over 377 square kilometres and is also wintering ground for migratory birds.

We were in Vedaranyam chasing the endemic species of black buck. After about half an hour inside, the naturalist pointed out towards a pair of spotted deer slightly hidden behind the shrubs. There was a family of wild boars loitering and grunting around too. We also spotted few horses that looked wild. Those were Feral Ponies, the descendants of once tamed and domesticated breed of horses. But the ponies at sanctuary had grown in the wilderness for last few generations and hence the nature had taken its course re-introducing their natural wild habits.

After spotting a lot of these horses and some spotted deer, I was wondering when I would see the black bucks that the sanctuary was known for. And then suddenly as if the elusive antelope had heard me, there appeared a bunch of Black Bucks grazing in the distance. One of those sprinted across the road just ahead of our jeep.

Done for the day as sun started its westward journey, we retired to a military establishment where we were hosted by a friend. I was told that the bordering sea had dolphin activity in early morning and that was also the time to see some migratory birds which were still in the area.

So we set out early next morning for a rendezvous with birds and dolphins. The sanctuary becomes home to migrating large flamingos but when I visited in December, those birds had already flown off to their own land. Though I missed seeing the Flamingos, I saw many other birds which made up for absence of pink feathered flamingos.

We had reached the beach at break of dawn and did spot snouts of some dolphins but the friendly creatures were not in mood to display themselves more than that. Instead we saw a lone Brahminy Kite perched on the fishing pole protruding out of sea.

There was also a lone Painted Stork in the soggy muddy patch away from sea. As I inched towards it it took flight and looked magnificent.

I could also spot a congregation of Black Headed Ibis, Russian Greenshank and Seagulls besides Cormorants and common Egrets.

The sanctuary also has remains of a lighthouse built by Chola Kings centuries ago. Though the light house was destroyed in tsunami and there is almost nothing to see but I noticed a strange creature in the puddle next to it. Later only did I learn that it was Mud Skipper, the amphibian fish. The fish looked like an alien with big protruding eyes on top of its head as it came out of water to slide in the mud.

Our early morning sojourn ended as the day began to brighten and became hotter.

I had not seen so much of variety of wildlife in one trip earlier. I was left with just one regret though that of missing the large pink Flamingos.