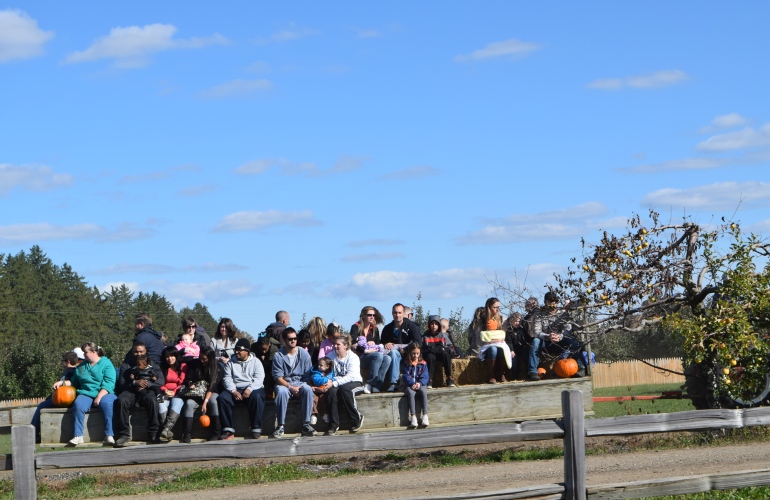 The best moments of travel are undoubtedly the interaction with locals and the experiences that allow you the glimpse of their life.

But I had not planned on it….and that is why the experience was much fulfilling and happy than any planned itinerary.

Instead I was on a spree of crossing out the must-do list on my vacation to USA. But ten days into the vacation and I felt the need to take a break before going on the frenzy of seeing all remaining touristy spots again. I headed over to my cousin’s at Troy, Detroit for the much needed rest. I was actually tired and the overnight adventurous journey in Amtrak from Washington to Detroit seated in the chair car with dangling feet added to my tiredness….but that is another story to tell on another day.

It was only by chance that a trip to see fall colors was canceled and the family decided to go to local farm for apple picking instead. Indian farms do not entertain such a concept as yet and the idea intrigued me much.

The said farmlands were swarming with people. The parking lot kept swelling with more people driving in not only family cars but big wagons and tractors! Families of four and larger groups came loaded with extra bags. It seemed like a fair…And I had no clue how all the fruit picking worked…

With Halloween approaching, many families were looking forward to picking large pumpkins for carving. Once inside the gates to farms I was surprised no end. It wasn’t just apples that were available for picking but a whole variety of vegetables and other fruits from large cabbages, pumpkins, bell peppers, cherry tomatoes to apples, cantaloupes and raspberries.

The farm picking was a totally new experience for me. And the deal was as impressive.

The visitors had full freedom to eat any and every fruit as much as they could besides filling up their bags to their heart’s content. So there we were eating apples and raspberries…nothing could be more fresh than the fruits plucked straight off the plant and eaten then and there!

The apples which were either red, green or reddish-white for me till then suddenly had names like ‘Granny Smith’, ‘Cameo’, ‘Jonathan’, ‘McIntosh’ and others. The fallen apples were collected in a small pick-up vans and taken to be washed and pickled, pressed to make cider or jam and other uses.

A small counter which served fresh cider stood at side of the farm and was the obvious point of interest once everybody had plucked to their fill.

We also filled up our bags with large cabbages, peppers and other veggies.

And boy was I having fun picking and choosing the best of the crop..

The time flew and I realized that half a day had gone in the farms without us feeling any tired. The farm trip in a way rejuvenated me…

Once our bags were full of fruits and vegetables we proceeded to the exit. And it is there that I understood how the picking business went about. At the exit there was a queue of vehicles each getting their bags weighed on a huge scale. Once everything was weighed in, the cost for each vegetable was applied and everyone paid as per the weight of different produce.

While the bags had a price…the fruits which we had finished eating through the entire day in the farm were absolutely on the house!

Large cups of cider and oven fresh sandwiches brought an end to my little adventure in the farm and I headed home content, freshened and happy but not before our collection was weighed and paid for.

Another glimpse of local life:

I had heard about ‘garage sales’ only through various Hollywood television series or novels. And I happened to see my cousin’s neighbor put one out. Indians do not sell old stuff out from their backyards and honestly people wouldn’t buy if you put your old stuff out there to sell!!

And I did get to see fall colors later near a lake close by.

1. Make sure you know someone wherever you visit and spend a day doing what the locals do…the experiences are worth it!

2. Do not plan everything…let some experiences just happen

10 thoughts on “Apple Picking In Troy”

I believe "Life is short and the world is wide"and travel is best possible solution to make the best of this life. I am Shoma Abhyankar. Welcome to ASTONISHING INDIA.