Rained In At Chicago

Chicago, to me, meant Mies van der Rohe, Louis Sullivan, Frank Lloyd Wright and some precious lessons from History of Architecture that I studied in college.

While chalking out the itinerary of a vacation in USA, Chicago had to feature. Needless to say I was much excited. We rode a bus from Detroit to Chicago. The ‘Windy City’ lived up to its name and I found myself pulling my parka close to block the cold October wind. It never helped…

We reached the city on a Sunday with slightly unfriendly weather tagging along…the third largest city in US with roughly 10 million people however seemed almost deserted. There were hardly any people on the streets…

The hotel room gave some respite from the cold winds and helped me plan for the best use of our day and a half stay in the city. I had picked up city tour guide pamphlets from reception. And this caught my eye.. 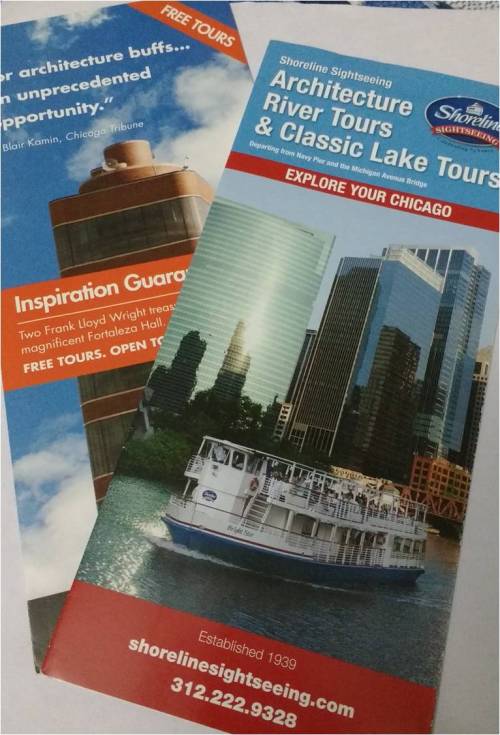 Free Tours! Holy grail…. Now this was what I was looking forward to even as the husband and kiddo whined and groaned to dissuade  me. Their protests were no match for my stubborn determination. I mean who goes all the way to Chicago on a tight schedule and not to forget tight budget and return without taking FREE TOUR to see the works of greatest architects? Not me…

With only a day and half at our disposal in the city, next morning was reserved for tours of my choice.  A little nap and lunch later, we ventured out to explore the city in evening. The cloudy sky threatened a heavy downpour so the evening plan was restricted to some window shopping, early dinner, Millennium Park and the Cloud Gate or ‘The Bean’ of course.

Millennium Park was deserted and little too dark for our comfort level. The sun had already set and being in a foreign land with nobody to turn to if trouble ever came calling we chose to skip and head to the ‘Bean’ instead. To our relief the place was buzzing with people trying to take photographs, lights reflecting from the bean surface, skyscrapers with thousands of lights shimmering in the dark night….Though the sky had turned an ominous yellow-grey nevertheless the Bean looked beautiful…dark and handsome showing off the Chicago skyline on its curvaceous surface.

The Bean is a result of a competition and is the brainchild of an Indian-born British artist Anish Kapoor….this I was not aware of but later I felt proud that another Indian made waves or beans!! in foreign lands. Made of some 168 steel plates seamlessly welded together, it mimics a mercury droplet with its underbelly having a navel like centre called ‘omphalos’ or Greek for navel. The center distorts the reflections oddly. 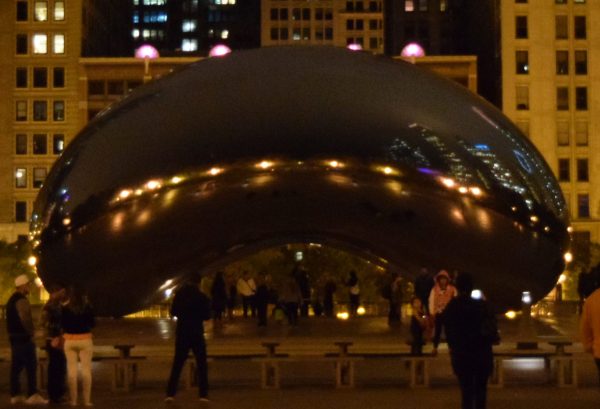 Soon enough however, the cloudy sky, as if realizing that we were at the Cloud Gate, burst open on us pouring heavily as we scrambled to put our cameras back. With a super quick dinner of a pizza slice each, we made it to the metro station without getting wet much.

A city is best explored on foot and in your interaction with locals. In India, train travel is quite interesting. Unknown people get into deep conversations on politics, education system, relationship advises, chit chat about extended families and almost about everything on the planet including Trump! But we were little cautious in striking any conversation with people while traveling in United States. I had wanted to go up to the street artist with his guitar crooning away while we waited for the train to pull up or with other two street artists drumming up a storm on empty cans of different sizes while we ran for cover from the pouring rain.

Though the random chit chat was not possible, we did walk down the road as much the rain gods allowed us to. And that is when we saw so much of graffiti…under the bridge, on roof tops and abandoned buildings..

Another side of underpass

I awoke the next morning to a very gloomy sky, chilling cold and fog. The sight seeing itinerary included Navy Pier, Bean and the Architecture Tour starting from the Navy Pier. At Navy Pier, however the weather had deteriorated and the rides of the 15-story Ferris Wheel and boats were all cancelled. Not equipped with rain wear, we were stuck at the Pier. The glass-walled landscaped atrium with frog-like leaping water bubble fountain was  the only  area where we spent most of our time and later ate at a Mexican counter.

Heading over to  the Bean after the rain stopped left us hardly few hours to pack and leave for the airport. 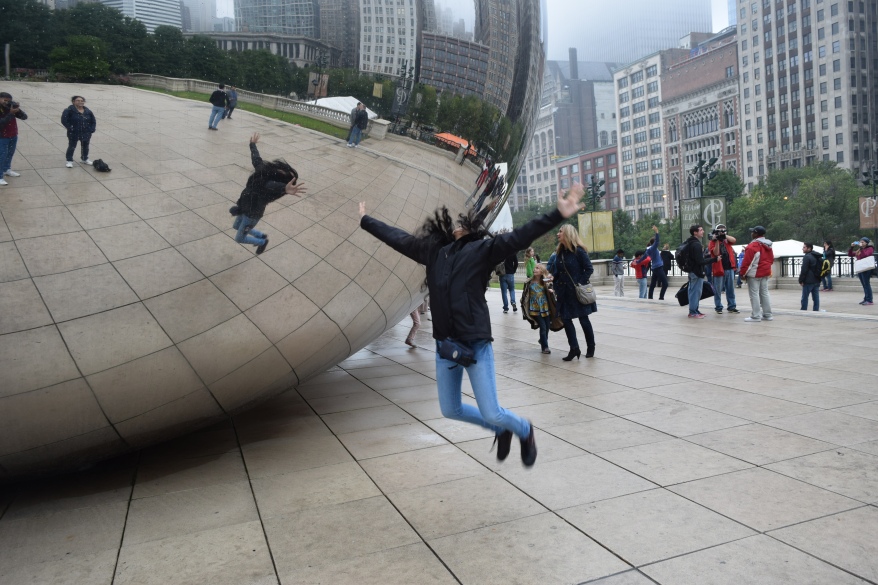 My big regret was the missed chance of reliving the lecture of  History of Architecture and missing the works of great architects!

While I missed out on a fruitful trip to Chicago landmarks and must-dos, here are some exciting things you can do if you are in Chicago(Get a city pass for free attractions):