Known for killing man-eater leopards and tigers of Kumaon region, Jim Corbett’s legend lives on in stories of his hunting expeditions, his house and a single barrel muzzle-load gun in Choti Haldwani, a village that Corbett adopted.

The Corbett family home at Kaladhungi, is now a little museum that gives glimpses of hunter-tracker-conservationist’s trysts with man-eaters.

Jim Corbett, however, turned into a conservationist and advocated preservation of tigers only after killing a large magnificent tiger which was not a man-eater but was extremely elusive and considered a prize catch owing to its size. This grand old tree stands tall, a mute spectator to hundreds of stories that unfolded under its canopy since last 300 years. It is the tree that was witness to the killing of ‘Bachelor Of Powalgarh‘ and consequent transformation of Jim Corbett from hunter to wild-life conservationist.

Post the declaration of India as a free nation, Corbett moved to Kenya but not before gifting his trusted aide ‘Sher Singh’ with his single-barrel muzzle-load gun for protecting villagers from wild animals.

The gun, now a prized possession of ‘Trilok Singh‘ the 75 year old son of Sher Singh, rests in Chhoti Haldwani next door to the only existing ‘Chaupal’. Chaupal, an integral part of Kumaoni villages was used for airing grievances of villagers to the head-man, to discuss various policies for benefaction of entire village and as a watch tower for any animal intrusions. Jim Corbett often visited the ‘chaupal’ to address the villagers’ problems.

Trilok Singh shows off the gun proudly but he was a kid when Corbett left for Kenya. The heavy gun is no more in use because there are neither the man-eater tigers and nor the ammunition for the gun. But every time people visit the Corbett’s Heritage Village, the gun makes its appearance keeping the enigma of the man-eaters and their slayer alive.

It is in this wilderness that I hoped to see ‘Sharmilee’ the tigress. But the beast chose to stay hidden from prying eyes. She did make her presence felt though by leaving fresh paw imprints on sand near the dry river bed.

It was naturalist Manmeet of Iris Spa and Resorts, who pointed out the paw marks and identified the distress calls of spotted deer but all in vain….the tigress had eluded us successfully.

Wild Iris Spa and Resort, deep in forest, at Kyari village, Ramnagar, is a perfect getaway  for city dwellers. Spread over a large area and designed around the trees that came with the land, the eco-friendly resort mixes the living spaces well with the green layout.

With an effort in keeping Jim Corbett’s legend alive, the resort arranges for screening of a movie based on Jim Corbett’s life and the wildlife conservation and visit to Choti Haldwani, besides a unique itinerary for its guests of safari, cycle trails, nature walks, tree climbing and walk along the river. 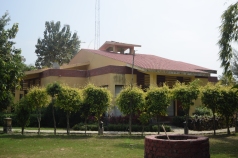 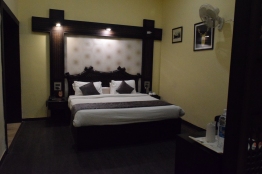 By the pool and spa 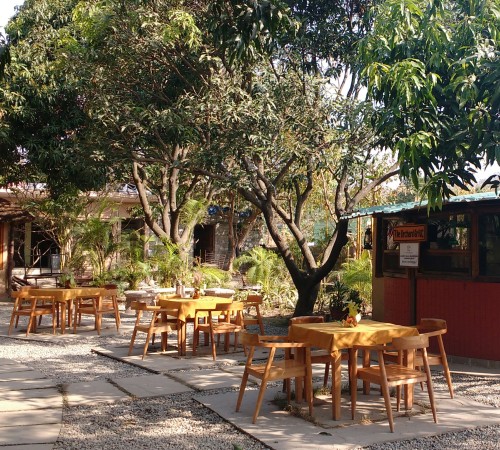 And as long as there are stories of tigers, Jim Corbett, will be fondly remembered as ‘Carpet Saab’ in hearts of Kumaoni people.

This trip was organized by Travel Correspondents and Bloggers Group for #tcbg_trips and hosted by Wild iris Spa and Resort.

18 thoughts on “In The Land Of Jim Corbett”

I believe "Life is short and the world is wide"and travel is best possible solution to make the best of this life. I am Shoma Abhyankar. Welcome to ASTONISHING INDIA.