In Search Of Rama’s Setu At Dhanushkodi

The sea seemed to have receded somewhere near the horizon….the rattling mini-bus ran along the deeply entrenched tyre marks on what seemed like an almost dry sea-bed. Sun had begun its westward journey and the skies were clothed in orange hues even as I traveled towards Dhanushkodi.

Mythology says, that it is at Dhanushkodi which literally means ‘end of the bow’ that Lord Rama marked the spot with his bow-end to make a bridge to Lanka. Located at the tip of Pamban Island, it was a bustling town once, complete with a railway station, a church, customs office, telegraph office, medical institution and boat express service to Lanka.

But what greeted me was a ghost of a town…abandoned, forlorn…in ruins. A devastating cyclone in 1964 devoured the villagers, the train passengers and a life they had cultivated there. Dhanushkodi stays uninhabited since then….

The ruinous church and railway station tell a story of what must have been. Another barrack like structure further down the beach had breathed its last with crumbling walls and caved in roof. The few fishermen huts seemed to sob in memory of the town’s healthier past.

I walked along the somber beach  under the gradually graying evening. There at Dhanushkodi the calmer waters of Bay of Bengal meet the turbulent ones of Indian Ocean but the sea seemed docile that evening….a facade people said… “Do not venture alone or deeper in sea; it is treacherous” 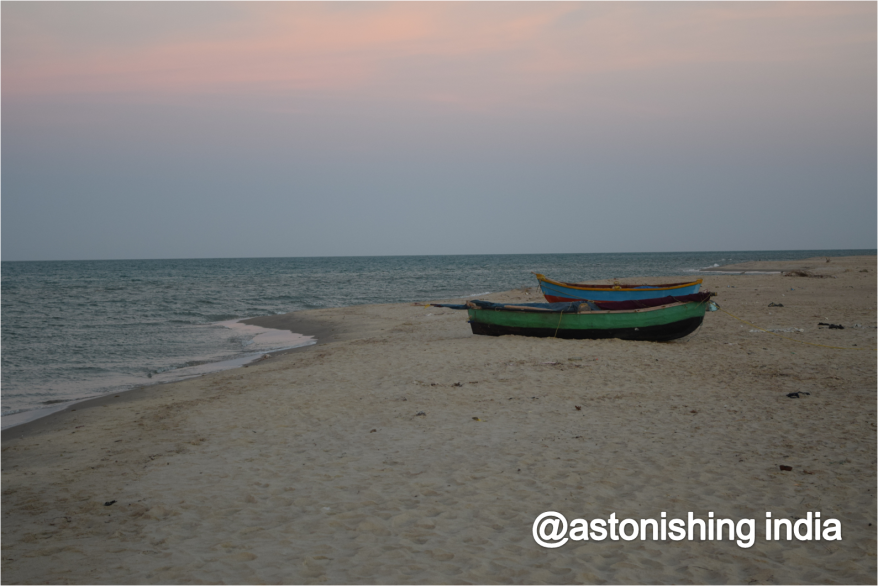 I wondered how it must have been when Rama decided to build the bridge… Was the sea tamer then? Did the stones really float on sea? Were corals used to make the bridge?

Though neither the historians nor the geologists believe the theory of a manmade bridge connecting Indian soil to Sri Lankan  shores but there exists an array of coral rocks between the two land masses and the sea is shallower along the rock ridge.

But Science can never compete with the faith or belief in God. And with Dhanushkodi being so close to Rameshwaram, where it is believed that Rama prayed to Lord Shiva before going on war with Lanka King Ravana, the story of Ramayana takes deeper roots in hearts of devotees.

And hence it is for this faith and belief in existence of God that people throng to this desolate town to touch the waters of sea, to pray where their God prayed for guidance and to have a glimpse of the mythical Ram Setu.

However, as evening darkened, the bus driver forbade us to linger far off on the beach and I could not search for any tell-tale signs of Ram Setu. The myth is that the new king of Lanka, Ravana’s younger brother Vibhishana, requested Rama to break the bridge after returning and that is what Rama did. I had to make peace with the thought that the said bridge was no more…swallowed up by the tempestuous ocean…

Mystery remains unsolved…if Ramayana was just a story, then the author must have traveled to all such places mentioned in the epic…he must have traveled upon a rock structure that took him to Lanka…he must have seen the sea swallow the rocky pathway…Or there really could have existed a superhuman like Rama who took an expedition to Lanka. Somewhere there was the Ram Setu

Whatever the truth may be…I felt a calm watching the blue water swish gently near my feet and ebbing away in the gray horizon. I returned as the night fell…my faith in God still firm and belief in story of Ramayana unshaken!

A little distraction from sightseeing.. letting the child in me go carefree in Europe
#spaintrip #streetartist #spaintourism
A #unescoworldheritagesite #cuenca is an adorable quaint little town in Spain. And guess what it has connections with Asterix and Obelix comic series 'Asterix in Corsica'. One of the ancient residence is converted to museum displaying excavations pointing to Romans and cut outs of Asterix and Obelix too find a place.
#madheghat waterfall is quiet hidden from plain sight. One needs to wade through watery rocky pathway to reach a narrow small clearing to see the whole waterfall cascading down from flat top of hill.
60 kilometres fro Pune is Madheghat Waterfall. To view it one has to walk down the plateau wading through a rocky pathway with water running across it. ... And the effort is worth it.
At a bar cafe in #Madrid the bartender very much knew I was filming him from a distance but he acted as if he was unaware and yet put up a fantastic show of making a cocktail 🍹 #spaintrip
A street performance by male Flamenco dancer shows the energy of the dance. Does it remind you of #kathakdance too?
Here I am at the Gothic Quarters in Barcelona, Spain. More about Gothic Quarters in another post.
#ranthamboretigerreserve #ranthamborenationalpark #ranthamborewildlife #wildlifeofrajasthan #wildlifesanctuary #nationalpark #wildboar #indianslothbear #neelgai #langoor
Har Ghar Tiranga... Congratulations on 75 years of Independence