I love taking road trips (preferably in self driven cars) not only because it gives me an excuse to travel to new places but also because it affords me a melange of sights all through the journey…a weird tree stump, a garishly dressed up couple, a pond with water lilies, a sunset, an odd signboard, a flight of birds, a field of sunflowers, an abandoned structure…..

We hit the road to escape the sweltering heat and vapid routine to the cooler climes of Kodaikanal. The capacious ebony highway sizzled in the copious wrath of the flaming relentless sun. The wet patches that seemed to appear suddenly on the ribbonous road were tricks that the almost melting asphalt, devoid of the cool green cover, played on our vision.

Off the curbed road on both sides however, ubiquitous coconut palms swayed in neat arrays…The tempting shade of the coconut groves and realization that those green orbs holding sweetest natural water inside them were not for our taking, forced us to drink more of the cool bottled water that was stocked up in the car.

Coconut grove…so near yet so far

Yellow boards in Tamil and the coconut plantations were the only proof of little hamlets that we whizzed past. There was almost nobody on the road barring one odd vehicle that groaned along on the highway. Soon the young banana plantations with broad emerald-green leaves appeared but much closer to the tar strip than the coconut groves. Again making me long for the crisp banana chips but we made peace with potato wafers from the car.

My urge to see the landscape rushing by beyond the car window made me take out the window sunshade, time and again. It was not even noon but harsh sun-rays were scorching and I yearned for some respite….

The three-hour ride to Dindigul on the oven-hot bitumen had made me doubt our decision of taking the road trip.  But thankfully, it was only a few months ago that we had changed the old tyres with the new CEAT ones, because had we driven with the old ones, the heat of road would surely have caused the tyres to burst.

Beyond Dindigul, it seemed as if someone high in heavens had heard our prayers.  The four lane highway tapered and there appeared large tamarind trees with dense foliage along the now lesser wide two lane road. The thick shade at once provided much wanted relief….like a cold shower dousing the fire….

Unlike the seemingly uninhabited areas earlier, there were more people on this patch of road…the vegetable vendors, fruit sellers, tea kiosks and tender coconut vendors with heaps of those green orbs to pick and choose from. Needing no invitation we promptly pulled over for the ‘malai’ and ‘nariyal pani’. Several other people had cued up for quenching their thirst with that power-packed gift of nature.

A petite dark-skinned woman with her sari pulled up slightly tucked at waist, wielded the heavy sharp long knife and chopped away the hard shell of coconut deftly, inserting a cheap plastic straw at the top before handing it over to the waiting customer. Her little son flitting around in muddy shorts handed straws to his mother and collected the empty shells in a heap. What intrigued me was her multi tasking skills. A brief lull in the continuous stream of customers and she quickly tidied up the place off bits and pieces of chopped coconut. No wonder hers was the busiest stall among street vendors…

Re-energised, we set on road again under the canopy of tamarind trees. Soon the shade disappeared as suddenly as it had appeared and we hit the winding road that would lead us to our destination.

Narrower road flanked by hill on one side and a gradually deepening drop on other side indicated our destination was just a few bends away. Tall trees wrapped in vines began accompanying us. The long-tailed curious monkeys darted along the road expecting some titbits from the vehicles lining up on the road ahead. A new toll tax pavilion slow in dispensing the go-ahead permission forced the cars and buses to queue up and await the turn. We were there to enjoy the journey and not in any particular hurry to reach the hill station so the half hour wait at the toll station did not dampen our spirits.

With no traffic fumes, dust and no harsh sun at all, I finally rolled down my car window and the fresh mountain air simply engulfed me.  Another bend later the entire landscape changed….the air was cooler and the whole hill-side along the road stood tall with forest of eucalyptus trees ruling the skyline. There was a distinct aroma…medicinal, slightly pungent but not revolting and oddly refreshing…

Eucalyptus all the way

I literally drank with my eyes, the sight of mountain slopes, chirping birds, blue sky… even the dry leafless trees seemed to smile back in rustic natural beauty.

I sat soaking in the nature and realised only some time later as the hill-side packed with coloured houses jostling for space crept up on the horizon…The road to Kodaikanal had reached its destination. 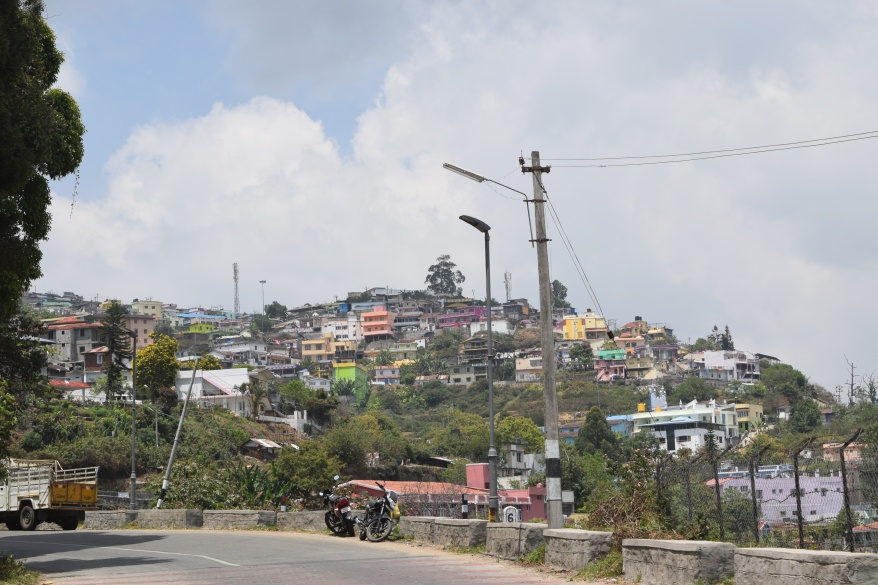 A journey is equally important as the destination….and a road trip better. My child like exuberance when I am on a road trip is best explained in this quote:

“To look, really look out upon the world as it is framed in the window of a moving vehicle is to become a child again”

Wouldn’t you give anything to be a child again…?

‘I’m chronicling my road trip adventure for CEAT Tyres in association with BlogAdda.’