Films have always been a big part of everyday life for an average Indian. The death-defying stunts have made many a common man believe in super human capabilities of film heroes. The reverence is almost God like.
While the Universal Studios in United States had long ago made tours to film sets accessible to common man, Indian film making was a no-admission zone until Ramoji Film City opened its gates for the common man in 1991, thus introducing certain aspects of studio filming. It brought to life the fantasy world in everyday life of ardent fan.
Having visited Ramoji Studio office at Worli as I returned to my hotel Four Seasons, Mumbai, a sudden urge to visit the Ramoji Filmcity at Hyderabad began tingling my itchy feet.
I soon learnt that Ramoji Studios have theme parks at other cities as well. So instead of heading straight to Hyderabad, I stopped at Chennai for another visit. And later took a Chennai to Hyderabad flight for a rendezvous with the first studio of its kind.
Ramoji studios, Hyderabad is one of the largest in world holding a place in Guinness Book of World records and offers everything related to pre and post film production. With sets for London streets or western cowboy movies or airport, hospital and even Japanese gardens, it can accommodate 50 film units at same time.
A bus tour takes the visitor to the various sets around the film city which is spread across almost 2500 acres with lush manicured gardens and smaller visitor areas. The Ramoji tower where simulated earthquakes could be experienced was a favorite among the kids as they could shout to their hearts’ content without actually being harmed.

One of the ornate sets One of the streets at film city

I was much impressed with the variety of the sets available right from the ones depicting Mughal era forts and palaces to Wild, Wild West of America. A replica of Lara Croft, the character from Hollywood movie “Tomb Raider” played by Angelina Jolie was another draw for kids who could not help but pose with the life-size Angelina mannequin or popping out their heads from the cut outs of cowboys! 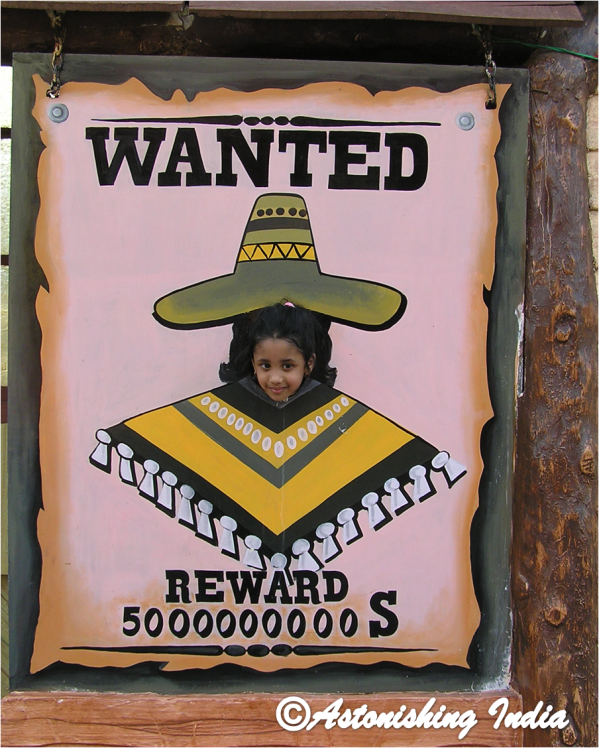 The Bahubali set was also very popular and over-crowded. While we took the general one day package of the film city, there are variety of packages available ranging from family packages to honeymoon and student packages to choose from besides Bahubali premium experience.
It definitely is an experience in itself to spend time at the film city in Hyderabad and worth spending money on. There are activities to do for all age groups, whether you want to laze in the lawns or become a kid again with kid rides or understand the finer nuances of film making or just be an enthusiastic fan watching a live shoot.
The film city now also offers a memorable wedding celebration with all fantasies turning real for a couple’s most important day. The event planners pull all stops and not only entertain guests but execute all rituals of the wedding ceremony to the minutest detail.
So what are you waiting for? Head over to Ramoji Film City for a crazy love of movies or just like that!!

#landscapephotography #backwaters #panshetdam #maharashtra #backyardtourism #instalandscape #instatravel
I am the river...
Enroute to Panshet lake for a quiet day outing.
Fifty shades of Nature #landscapephotography #landscape #fiftyshadesofnature
Reflections of life... #reflection #landscapephotography #kaasplateau #kaas #kaaspathar #plateauofflowers #unescoworldheritagesite #landscape #treephotography #reflectionphotography #reflectionphoto #picoftheday #shotoftheday #instalandscape
#kaasplateau #plateauofflowers #unescoheritage #fragilelandscapes #landscapephotography #smithiahirusutaflowers #picoftheday #nofilter #unedited
Travel far and wide but let not #pandemic travel with you #staysafe #mindfulness #travelsafe #wearmask @thewomen_impact
As I reached the outskirts of Bhangarh Fort, omnious black clouds filled up the grey skies and a lone dead tree rose up guarding the entrance...as if it was warning me of the abandoned #haunted #bhangarhfort ...
This marble arch with hooks was used for swings by royal ladies of Mughals. Maharaja Surajmal of Deeg in collaboration with Marathas had attacked Delhi fort and siezed a horde of arms and ammunition to bring back to Deeg. This arch was part of the bounty captured from Delhi and installed in Deeg Mahal complex as war victory loot.
Rajasthani women are beautiful.. the village belles even more so.. at any age.