Born free: In wilderness of Gir

Also known as Sasan-Gir, the Gir Forest National Park and Wildlife Sanctuary in Gujarat was established in 1965 and is the only home to Asiatic Lion.

I had decided to take a jeep safari in the wilderness to get a glimpse of this magnificent creature.

Even after spending the better part of night standing in a queue and luckily or unluckily landing at the first spot when the forest department staff began the distributing permissions for safari, much time was lost in waiting for the guide to turn up while we waited in the jeep. We should have been on Route no. 1 assigned for our jeep, at six in the morning at the least. The morning twilight had brightened up fast and I had my apprehensions of missing the lion family who as the sun rose higher, would take refuge in the deeper, cooler and denser part of the forest.

My concerns were validated and the morning jeep safari of first day at Gir Forest was a disappointing excursion.

With about 523 Asiatic lions, the former hunting ground of the Nawabs of Junagarh, Gir Forest National Park and Wildlife Sanctuary spans an area of roughly 1400 square kilometres. With definite trails marked for the safari enthusiasts, the denser parts of the Park are strictly off-limits or so it seemed when our trail ended on a makeshift blockade displaying ‘Entry Prohibited’ sign.

I was ruing that had we reached at the permission counter just few seconds late, we would have been on the second jeep on Route no. 2 where we later came to know; one lion family had dragged its day’s first kill and sat devouring it in plain sight, oblivious to the excitement of the visitors.

It wasn’t a complete wasteof time though. We did come across a golden jackal at the water-hole, few nilgais (bluebulls) and herds and herds of chital (spotted deer) with one curious young one straying much closer to our jeep. 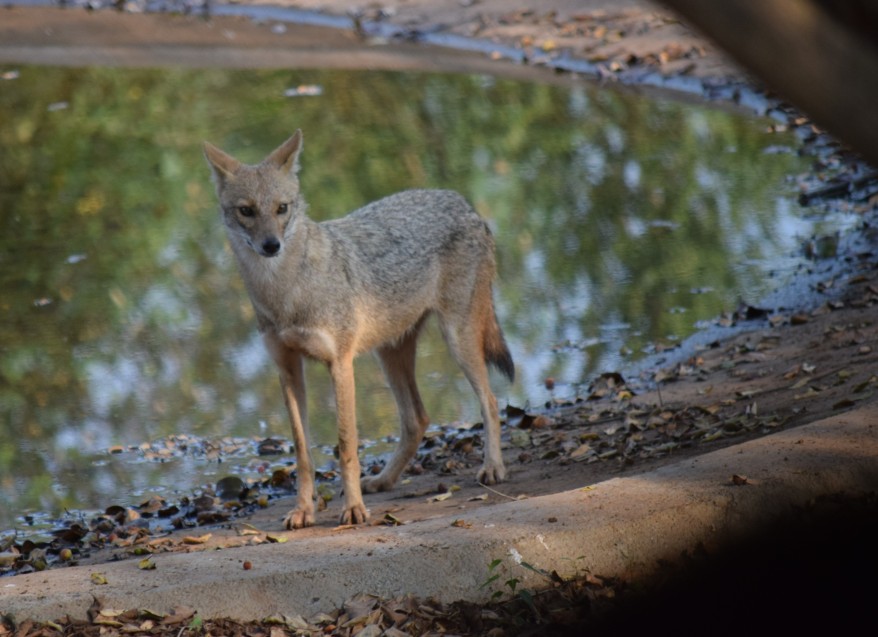 Curious at our intrusion; the spotted deer

Deer that strayed away?

The rising sun filtering through the deciduous forest did nothing for our dampened spirits. Disheartened, as we made our way back to the park entrance, the jeep driver and guide signalled us to be quiet, for their trained ears had heard a low grunt. Our hopes raised we promptly held our breath to strain our ears as well and sure enough were rewarded with another growl. The king of the jungle was however nowhere to be seen. After a good ten minute of patient wait, the guide deduced that the chances of lion heading back towards an open area were rare. The driver also was concerned about the time taken for safari exceeding its limit.

Pugmarks along the trail

As we resumed our drive back, the jeep came to an abrupt halt again just 200 meters from where we had heard the lion grunts. The driver showed us the fresh pug marks along the trail, however reminding us again that it was unlikely that any of the pride members would wander back from interiors of the forest.

Sighting the pug marks was a consolation prize and yet it gave us a new hope and reason to try our luck on yet another safari the next day.

The Interpretation Zone of Gir National Park at Devalia runs regular bus safari tours within a smaller some 400 hectare area cordoned off from Gir Park by a chain-link fence. The probability of spotting a pride in its natural habitat is higher here.

We boarded the bus, our safari entrance tickets in hand, at around nine in the morning. I was sceptical again about the possibility of spotting the elusive lion family with the sun bearing down upon us with all its radiance. Half an hour into the safari and I started fretting about another failed effort.

The bus reached a fork on the trail. A wrong turn and chances of spotting the royal family would have slimmed further. Two men, however, emerged from behind a tree and waved at the bus driver pointing in the direction where the lioness with four adolescent cubs had wandered off post their meal. The driver seemed as much eager as the visitors to finally see what they had travelled for, from various parts of the country.

A moment of silence after the collective gasp soon turned into excited yet hushed murmurs as soon as the bus carrying us, the ever-yakking homo-sapiens, came abreast to the tawny beasts taking a break in the shade of broad-leafed teak tree. Everybody clamoured to one side trying to capture at least one image of the magnificent and graceful lioness who had parked herself there, moments ago post a hearty meal.

The lioness accompanied by adolescent cubs was not willing to be the object of fascination for the mere mortals, who, she knew, did not have courage enough to survive a single roar at such close quarters and hence had caged themselves in a motored metal box.

This was her domain…her home…the wilderness…She was born here…Free…a mistress of her own will… If she deemed it fit to humour us, the two-legged camera-toting puny living things, she would stay and let us ooh and aah at her cost but she was in no such mood and with a bored gaze she dismissed us all….It was for only few minutes that she let us all have a glimpse of her before sauntering away in the deeper cover of the forest.

“There is something about safari life that makes you forget all your sorrows and feel as if you had drunk half a bottle of champagne — bubbling over with heartfelt gratitude for being alive.” Karen Blixen

And my joy did bubble over at the sight of the sinewy golden-fur lioness more regal than the lions that we would later see at the end of safari. Her fear-inspiring enormous size made me feel inadequate…I felt glad I was inside the bus and not at her mercy in the forest. Yet her languorous indifference towards us left me amazed. Much like a fierce queen, she was unperturbed by our presence and seemed to say:

“Danger? Hah! I walk on the wild side…I laugh in the face of danger”

Mission accomplished our bus took the return route in a hurry but as we neared the end of trail, we could spot two lions lazing, yawning in the open next to the trail. Smaller in size than the African lions with their manes also sparser than their far-off cousins, these lions did not look as grand and majestic… They seemed much docile than the lioness and the cubs we spotted earlier. Only later did we realize that the forest staff kept two jeeps ready with guides who ambushed and drove those lions out in open so that the visitors to the park left as a satisfied lot…. and it seemed to be the regular affair. 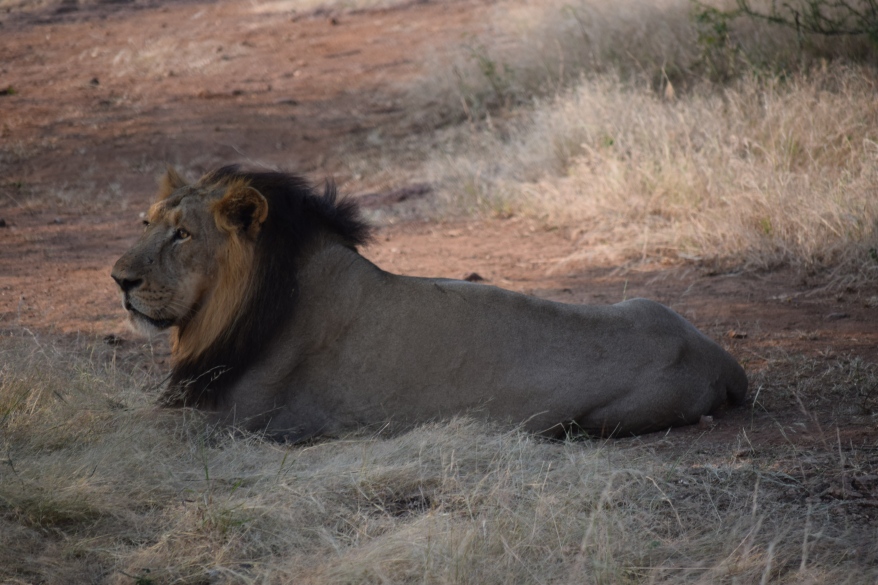 Yawn!! When can I sleep people?

Though it was highly improbable that we would have witnessed a crouching lion camouflaged by the high yellow-brown grass ready to pounce on its prey yet the practice of forest staff to flush out the lions for sake of visitors’ did not seem ethical to me.

And I was relieved that our sighting of the majestic lioness was very much a serendipitous encounter; the way it is supposed to be on a safari.

Happy at our fortune of seeing the ferocious felines in their home, I couldn’t help but sing “Hakuna matata….it means no worries, for rest of your days…hakuna matata, hakuna matata…”

All kinds of budget hotels and jungle resorts are easily available at Sasan Gir. Gir Jungle Lodge is near the entranceof the national park. We stayed at ‘Savaj Resort‘ for 8000 Rs per day with three meals. The food was Gujrati cuisine; absolutely tasteful, hygienic and cooked in home style. The staff was very helpful and polite.

Gir is connected via road to Ahmedabad, Rajkot, Diu. Private taxis and buses ply on these routes.

Evening sky colours from the balcony yesterday.
A little late in capturing the #supermoon2021 #rosemoon #moonphotography #nikonphotography #nikon3300
#birdphotography #birdsanctuary #birdcaptures #naturephotography #birding #birdwatching #birdsonearth #birdsofinstagram #birdstagram
Waiting to sail away...
My photograph of @shikwaheritage in @outlooktraveller
Eurasian seagulls migrate to India to escape harsh winters. Bhigwan bird sanctuary, backwaters of Ujani dam on Bhima river in Maharashtra is one of the hotspots for migratory birds.
A little late to visit Bhigwan bird sanctuary but still saw many migratory birds this time. Flamingos did not land in Bhigwan this year.
Occasional #bikebuddies out on a trip to #Lavasa which is almost a ghost town now with most of it shuttered down.
My images #featured on @lonelyplanetindia
My pictures #featured on @lonelyplanetindia feed #namsai #goldenpagodanamsai #goldenpagoda #arunachalpradesh