In search of Diamonds at the ‘Shepherd’s Hill’

The first thing that I learnt was that all the world-famous huge diamonds…..the Darya-e-Nur, the Koh-i-noor, Hope Diamond, the Regent Diamond all were excavated from Golkonda mines! The fort city once, was an important trade centre of precious stones and gems and kings had a dripping with riches, opulent lifestyle.

That piqued my interest….diamonds are a girl’s best friend they say!!

Would I find another long-lost forgotten diamond tucked under some rock ….waiting to be found only by me?

Nagina Bagh: It is here that all trade in precious stones and diamond was carried out

In Hyderabad for four days, spending time with my sister and nephew, we had one day ear-marked for a visit to the fort. Monday being a working day, we were on our own so we booked self-drive rental Zoomcar , a Ford Ecosport  at Rs 1200 for the day. We picked up the car from Gachibowli area of Hyderabad and with GPS to guide us, began our day’s adventure.

A day before, it had rained heavily and weather had turned quite pleasant…..no harsh hot sun. The timings to visit the fort started early at 9:00 am and to take advantage of the breezy cloudy pleasant morning, we reached dot on time for our tour.

“Golla Konda” which means ‘Shepherd’s Hill’ in Telugu(Language of states of Telangana and Seemandhara) lies 11 km west of Hyderabad city. The fort originally built by Kakatiyas of Warangal, on a 400 ft  high granite rock, changed many hands, from Bahamanis to Qutb Shahi rulers, before finally being annexed by Mughal Emperor Aurangzeb in 1687. Qutb Shahi kings extended and built massive three-tiered fortification walls with 8 massive gates, 87 bastions 18 m high and mounted with canons, deep moat all around making the fort biggest and impregnable among the forts of Deccan  Plateau.

‘Bala Hissar’ gate is the main entrance to the citadel. This entrance of the fort is so designed, that the gate is not visible to the outsider. This was a clever idea to prevent enemy from pushing open the gates with help of  elephants. The elephants would lose momentum and force and would not be able to force the gates.

Another marvelous architectural achievement at this gate is its acoustic design. The sound of a clap made at the centre of the entrance pavilion at ‘Fateh Darwaza'(victory gate) could be heard about a kilometer away at the hill-top in the fort at Bala Hissar Pavilion (the private residence of king). This system was used to signal any breach in safety and warn the guards at the palace of impending danger and to announce the arrival of important dignitaries. The layout of public and administrative buildings was such that the sound echoed at the entrance and was deflected by the walls to reach the highest point.

There are even other such walls of stone at the King’s hall of meeting, where something whispered in a corner could be heard at opposite corner without others getting to know about the message. This acoustic design was used to transfer urgent secret messages to the king! 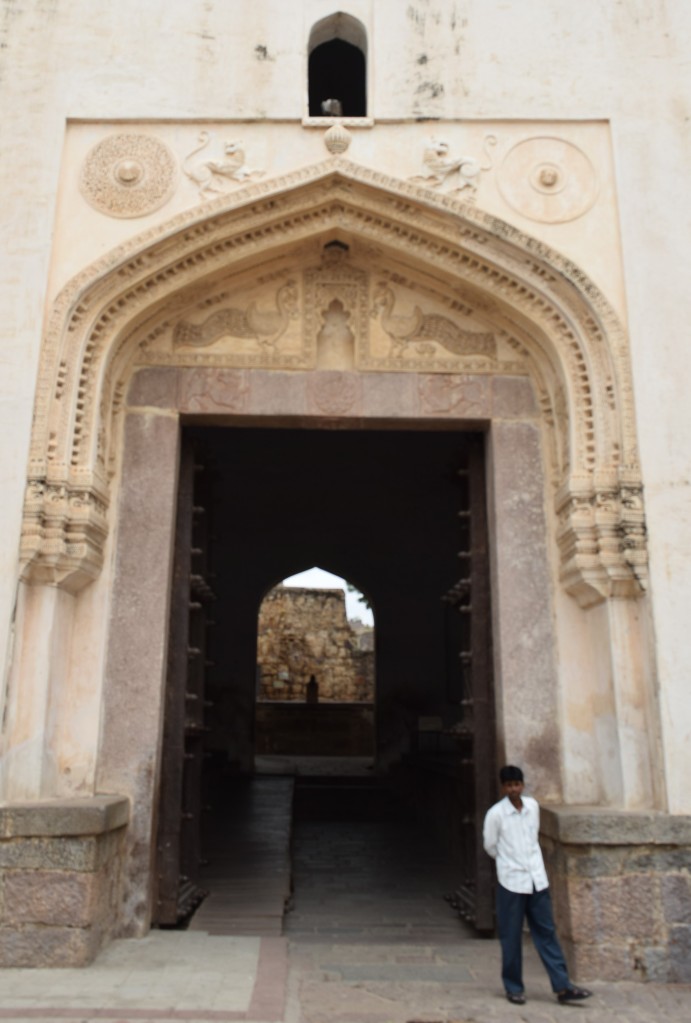 A clap at main entrance could be heard 1km away

Fort from the Bala Hissar gate

Besides taking great measures to thwart enemy advances, apparently the king made men, aspiring to join the royal army, pick up an iron weight of 250 kg! No sooner had our guide provided this information, our daughter who adores her Dad and considers him no less than the ‘Superman’ insisted that he should try to move that stone weight! Poor Aby, tried as much but could only manage to tilt the weight slightly, bruising his palms in the bargain!! 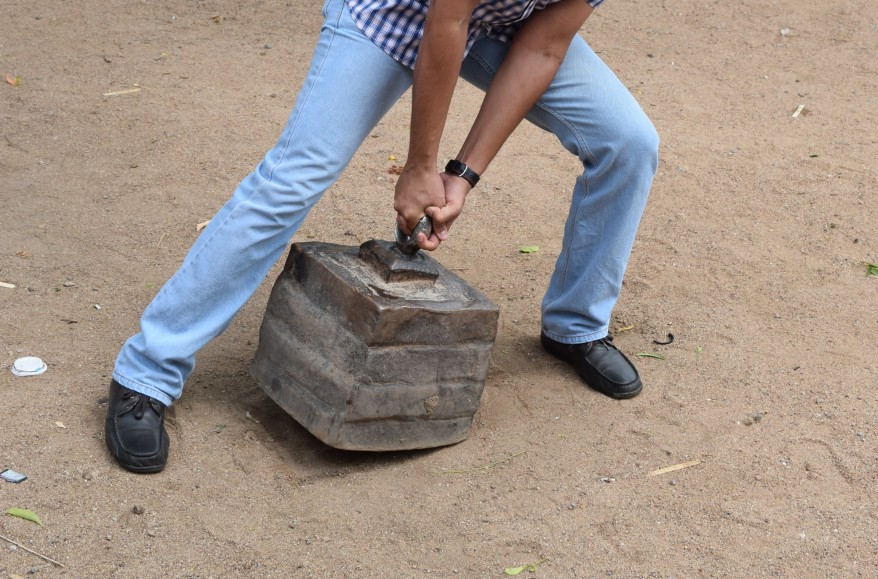 Trying in vain to pick the iron weight

The fort also had a unique water supply system. Water raised by Persian wheels was collected in three different reservoirs and supplied by a network of earthen pipes and stone aqueducts by gravitational force. 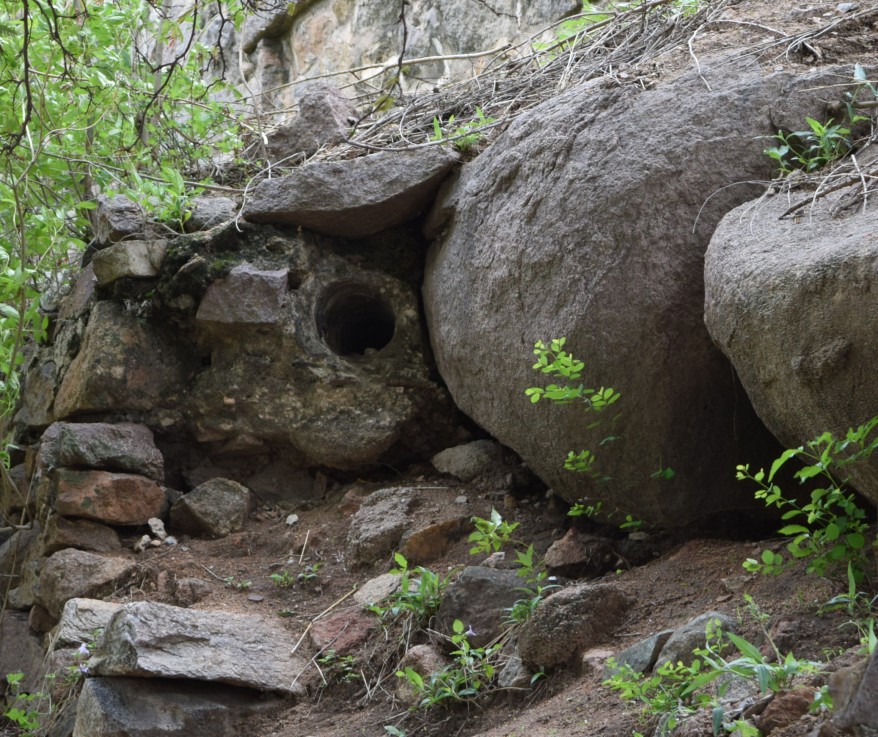 Imagine the engineering skills prevalent during those days…the engineers beat the heat of rocky Hyderabad with an indigenous water-cooled walls in the palaces!!

Broken stone aqueducts along the walls of queens residence

The private residences of kings and queens within these colossal walls were well hidden from direct line of sight of visitors. The walls and arched pavilions were so designed that only a blank wall could be seen from where the visitor awaited for  private meeting with the  King. The private chambers of the kings and queens had separate mosques, fountains and libraries. The walls inside the now ruined chambers were lined with small alcoves which were used to place lamps and light up the palace. It seems the palace walls were plastered with some special mix of lime, jaggery and eggs which also kept the insides of palaces cool!

A visit to the fort transports to a time gone by….I could imagine the bangles tinkling among the peals of laughter of queens and their maids, showing off their bejewelled necks and long fingers sporting huge solitaires, even their clothes studded with gems in gold embroidery….. The richness and grandeur now visible just in the expanse of the fort city…

With the last piece of information, that I could squeeze out of our guide, I made my way back to the entrance gate, climbing down the narrow stone steps, on which once palanquin bearers carried the queens, I heard somebody call me….

Steps leading down to the Queen’s quarters; new city beyond the fort walls

A  young man and a woman who looked like two love-birds rendezvousing  far away from watchful eyes of their parents, accosted me at the steps within the huge Golkonda Fort….. Total strangers and they had the nerve to ask me  for a picture!

Flattered much as I was, the caution kicked in almost immediately, and I absolutely refused the girl’s request. Now, I am no celebrity (I would love to be one though)…. nor do I resemble any…..I wondered what their agenda was!

My husband Aby, teased me… “It must be your new dress…. That girl must have wanted to copy the pattern!” I tell you, he can be mean to me at times…. he deflated my secret euphoria in a second…..

Posing for a private photoshoot never hurt anybody!

However, the eager couple,  did give me the idea of indulging in a little photo shoot for myself and that is exactly what I did…. Getting framed in those gorgeous stone arches…

But alas!! I did not find any diamond large or small (not even teeny-tiny!!) fall out of some crevice or roll out from under a rock for me to lay claim to……

I should not have taken Marco Polo’s suggestion in his ‘Book of Marvels’ that reaching down in sand soil at Golconda would fill the hand in diamonds…..

Better sense prevailed and I went ahead and bought a pearl set from Hyderabad jewellers instead!

Location and Getting There: Golkonda fort lies 11km west of Hyderabad. Hyderabad is a well-connected city by road, rail and air. Buses, taxis ply till the fort which is a popular tourist destination. Self-drive rental cars are available with rates 100 Rs-110 Rs/hour. It takes roughly half an hour via Fort road if you are not caught up in office going traffic. Wide roads  make driving easy task despite of traffic.

Road to Fort (via Google maps)

Stay and Food: A cosmopolitan city, Hyderabad has many options for tourists. It is famous for its Biryani and Seek Kebabs  in the old city near Charminar.

Light and Sound show: Two shows, one in English and another in Telugu/Hindi are organised at 7 pm near the Queen’s chambers of the Fort. Though we missed this show, but it is a major attraction at the fort and some say better than visiting during day!

So here is the burst of photographs I was talking about the other day.... I gave my mobile for one picture to other person on boat and he went all trigger happy...
I wish I had someone to do some flattering photo shoot for me once in a while. Handing over your camera or mobile to guides or someone in the crowd doesn't help much 😅
#landscapephotography #backwaters #panshetdam #maharashtra #backyardtourism #instalandscape #instatravel
I am the river...
Enroute to Panshet lake for a quiet day outing.
Fifty shades of Nature #landscapephotography #landscape #fiftyshadesofnature
Reflections of life... #reflection #landscapephotography #kaasplateau #kaas #kaaspathar #plateauofflowers #unescoworldheritagesite #landscape #treephotography #reflectionphotography #reflectionphoto #picoftheday #shotoftheday #instalandscape
#kaasplateau #plateauofflowers #unescoheritage #fragilelandscapes #landscapephotography #smithiahirusutaflowers #picoftheday #nofilter #unedited
Travel far and wide but let not #pandemic travel with you #staysafe #mindfulness #travelsafe #wearmask @thewomen_impact
As I reached the outskirts of Bhangarh Fort, omnious black clouds filled up the grey skies and a lone dead tree rose up guarding the entrance...as if it was warning me of the abandoned #haunted #bhangarhfort ...