Step Wells or Baodi were integral part of Indian villages before the British imposed their way discarding the need of such water reservoirs and belittling the societal functioning of the villages.

On a trip to Jaipur, we made our way to Chand Baodi at Abhaneri (originally called Abhanagari meaning “City of brightness”), a village 95 km from Jaipur on Jaipur -Agra road, established in 8th century by the king  “Samrat Mihir Bhoj”. Of a once upon magnificent architecture and well laid town, what remains is Chand Baori while the rest of the new village is a brick and mud haphazard construction.

Chand Baori is one of the oldest, largest and deepest and the finest example of step-wells in India with 3500 steps descending 20 meters down (13 stories)to reach the collected water. The narrow and symmetrical steps are along the three sides of this large square water reservoir. The fourth side has  corridors, pavilions and rooms for the royal couple with stage for dance performances. Small temples with Hindu gods and goddesses were placed at various levels of this step well. If conservation architects are to be believed, the construction of this huge well is such that it can sustain an earthquake measuring 7.6 on Richter scale! The funnel shape of this step-well allowed not only ground water but also rain water to collect and be available during the dry spell of hot and arid Rajasthan. The depth of well combined with the architectural features like thick stone walls and vaulted ceiling, provided effective passive cooling to the people on platforms and steps.

The step-well was community gathering places during festivals, cool retreats for travelers, villagers and king.

A stay-vacation at Jaipur makes the visit to this architectural marvel, worth every minute. It was surprising though that there were no tourists except an old European couple who seemed interested in the finer carvings of the structure. Far from popular touristy places of Jaipur, much inside a small village and approached by a dusty nondescript street Chand baori is located next to temple of ‘Harshat Mata Goddess’ who for locals is the goddess  of joy, happiness and brightness.

The guide giving the old couple a garbled version of history was getting on my nerves and I had bluntly butted in to explain the old couple a little about the Hindu trinity of Gods. The result was expected and the guide refused to tell me further about the history of this step-well. To each his own….

Chand baori is located next to temple of ‘ Harshat Mata Goddess’ who for locals is the goddess  of joy, happiness and brightness. Razed by some Muslim invaders, some defaced sculptures of gods and goddesses still exist along with broken parts of the temple.

Statue in a niche on wall 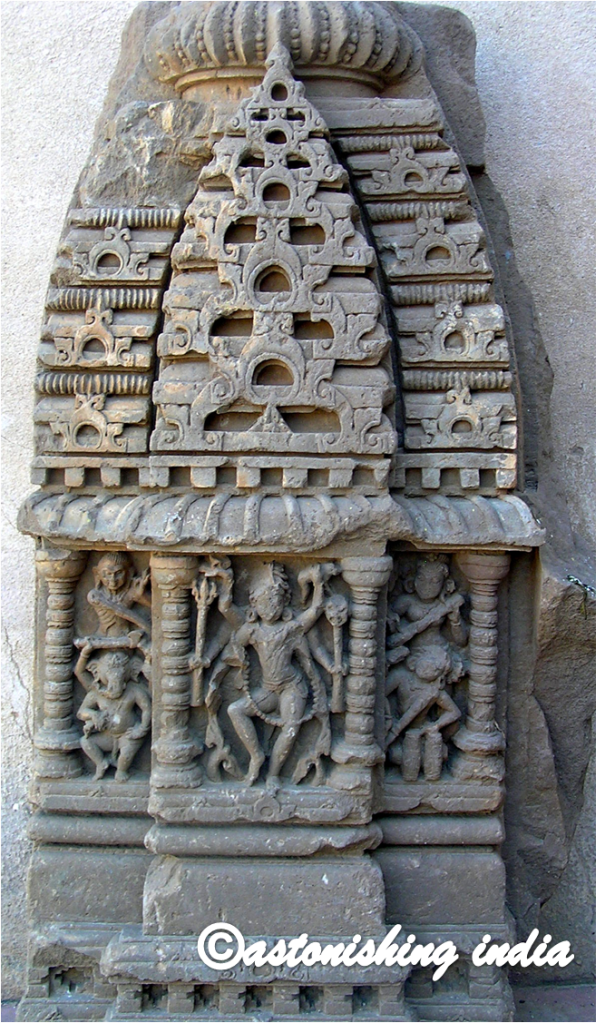 I have a inclination to explore the historical heritage of the country and my hunger led me to seek out this step-well. With growing concerns of water in current times, I wonder if we should revive the ancient wisdom and seek answers for a balanced eco-system in our history?

An interesting trivia: This step-well was featured in movie ‘The Fall’ and ‘Dark Knight Rises’?