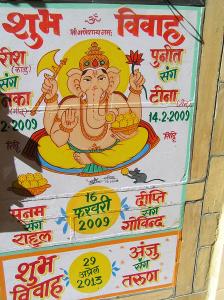 Ever asked a street painter to paint an invite on an external wall of your house or your neighbor’s wall? No, I am sure no one has. Even I never knew of any such practice until I visited Jaisalmer , a small town in the state of Rajasthan, with ornate havelis (large houses of rich men), fort, camel, leather bags and belts , sand dunes and all other Rajasthani things which you may or may not know.

This is a marriage invitation painted on the wall with the image of  Hindu god Lord Ganesha(Ganesha is the most auspicious among all Hindu gods. Also read https://shomaabhyankar.wordpress.com/2012/12/19/elephant-headed-god-lord-ganesh/ ). There are names of five couples and their marriage dates on this unique invitation with each new date being added later without destroying the first painted invitation.

This practice of wall invitations started during the days of kings and queens. Back then it was a way of not only informing the village but also to show off the popularity and riches of the hosting family. The number of guests would endorse the hosting party’s social status and their hospitality. The practice still continues though it is almost extinct except in small villages and within old fort walls of Jaisalmer. It may not look a very advanced practice as far as all  developed countries’ standards but imagine how much paper it saves and in turn trees!! Also who ever reads the invitation and plans to become a part of it, is hosted well and not turned away thus glorifying the Indian tradition of ” Atithi Devo Bhavah”  meaning   “Guest is God“.

I still might not opt for such an invitation though, not only because it makes the wall of my house difficult to repaint but also because I do not have means to host an entire town….inflation!! But I am surely impressed by this paper saving idea…and I guess It happens only in India !!