Having enjoyed the Navaratri celebrations at the largest congregation of dancers at United Garba on my earlier visit to Vadodara and a visit to Kevadia for Statue Of Unity, I was all set for exploring Gujarat’s first UNESCO World Heritage Site at Champaner-Pavagarh Archaeological Park in Panchmahal district of Gujarat where 114 monuments have been listed by Heritage Trust Of Baroda. These monuments include temples, mosques, tombs, water tanks, walls and granaries.

Champaner came to be recognized as UNESCO World Heritage Site in July 2004 for its peaceful co-existence as living Hindu pilgrimage along with exquisite sandstone mosques, tombs and Jain temples and also for retaining its medieval heritage and culture.

Now in ruins, Champaner named after king’s close friend Champaraj, was a bustling town, established by Vanraj Chavda in 8th century. The Pavagarh hill has the Kalika Goddess temple and ruins of forts. The region having changed many a hands came under Sultan Begada’s rule in 1484. It was renamed ‘Muhmudabad-Champaner’.

And then began the conceptualization of a well planned city.

Entering through one of the arched entrances of the planned city of Muhammadabad Champaner, I couldn’t help but notice the wide streets that were once flanked by white washed houses, the remains of which were visible still. The pathway leading to mosques lay on the outside of the royal enclave.

Champaner Pavagarh Archaeological Park is in true sense an offbeat destination, just an hour away from Vadodara. The city was once known for its mangoes, sandalwood  and silk. When Mughals took over, the city was abandoned. For years it remained abandoned and all efforts by British to rehabilitate it with silk weavers failed. When tribals settled in late 19th century, the monuments were rediscovered.

While ruins do tell a tale of a flourishing town, it is the structures that still stand which speak of fine craftsmanship and an architecture that was undeniably exquisite and beautiful amalgamation of Hindu motifs and Muslim features.

One of the important structure that stands intact, though not in use anymore, is the Saher ki Masjid. It was the first one that I came across at Champaner-Pavagarh Archaeological Park.

Built in 15-16th century, ‘Mosque of the City’, Sahar ki Masjid, was the private mosque for royal family and nobles of Gujarat Sultanate. Constructed on a raised platform, the mosque is made in mixed architectural styles, the Indian style of columns and beam and Islamic system of arches resting on columns.

The central entrance arch flanked by arched ‘jharokas’ leads to a large prayer hall with five ‘mihrab‘ . The columns inside the hall and the interior of the five domes are embellished with Hindu floral motifs similar to Jain temples. The carved lotus in Jain temples ceiling is found on the inside of the dome at this mosque…. a very Hindu feature.

Protectedby ASI, the mosque lies abandoned with only long tailed langurs making it their playground.

Roaming further beyond the mosque, I saw few houses that were inside the fort walls and wore a fresh brick mortar look, a chai shop with few villagers lounging.  As I took shelter at the tea stall from sudden rain, the guide enlightened me on why a very Muslim structure has all Hindu motifs.

Unlike the other Muslim structures where temple parts were used to construct new buildings, the structures at Champaner were built as such with Hindu elements. The reason being, Champaner was a Hindu kingdom and all the artisans were accustomed to make temple and palaces of Hindu kings. When the town came under the Gujarat Sultanate, the same craftsmen were employed to build mosques and other structures. Since the artists were not aware of Muslim architecture and the new rulers did not particularly dislike the prevalent style of art and architecture, the mosques came to be made in amalgamation of both architectural styles creating a unique harmony.

Champaner predates Mughal architecture. It is said that some Mughal structures took inspiration from it. The other largest mosque at Champaner was the Jami Masjid. This is where most town people came to offer their prayers.

At a first glance, this mosque with its domes and minarets peeping from behind the trees, had faint resemblance to Hagia Sophia of Istanbul, Turkey. But a closer look reveals the elaborate intricate carving teeming with embellishments similar to the step-wells of Gujarat.

The columns of the mosque are decorated with pots, lotuses and floral patterns and the ceiling has panels  with elaborate patterns like that of Tree of Life.

Tree of Life engraving at the ceiling of jami Masjid, Champaner

Lotus, pot and floral motifs similar to temples at the Jami Masjid, Champaner

With one hundred seventy two pillars, a large prayer hall, huge open area surrounded by arched gallery on three sides , Jami Masjid is the most imposing structure of Champaner. The main entrance to prayer hall has 30 meter tall octagonal minarets and the center of the hall rises up in two stories with the upper story more like an arcade. The pillared open arcade is similar to the pavilions of step wells. This unique feature which is not seen in any other mosque, allows the air circulation and keeps interiors well lit and ventilated. 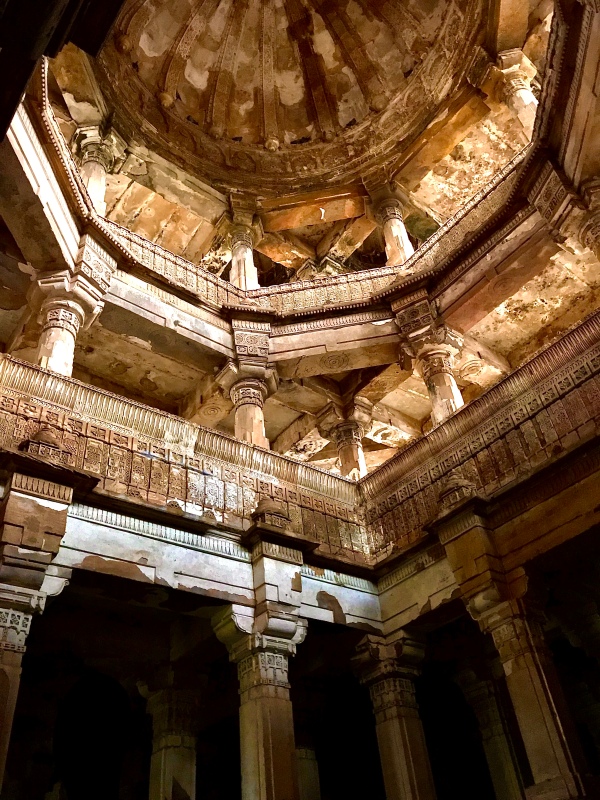 Arcade at the Jami Masjid

Off the three entrance porticos to the mosque, the one in east is adorned with beautiful jalis which again is ta very unique feature of this mosque. The dome does not exist anymore. Though the mosque was for general public but there was another intricate jali screen to separate entrance to the prayer hall for women and royalty too.

Entrance portico without the dome

The mosque also features a water tank which was used for rain harvesting and could supply water to the village during hot season. 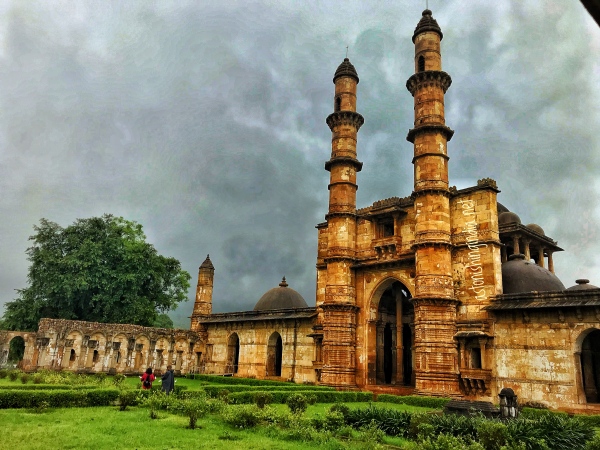 Another interesting mosque at Champaner was the Ek Minar Masjid.

This interesting mosque has nothing left besides the minaret. Off the road somewhere in forest stands this lone minaret approached by a mud pathway. A small almost blink-and-miss signboard points towards the pathway.

I would have missed seeing this in fact if the guide had omitted to mention and point towards it. And honestly the guide was not counting on me to show interest….with gathering clouds on the horizon that spelled a downpour he was more in hurry to deposit me back at the hotel.

There are more structures worth visiting on Pavagarh hill. Man made water tanks abound on the hill. The Kalika Temple of Goddess Kalika is counted one among the Shaktipeeth and is Hindu pilgrimage site. The Saat Kaman or Seven Arches is another intriguing remnant of some structure. All that remains are the arches. The purpose of the structure has been lost probably.

I could not visit this with rain threatening to pour down.

How To Reach Champaner:

Where To Stay and Eat:

Read more on wonderful places to visit in Gujarat.