I was invited by Gujarat Tourism Department to attend NAVARATRI FESTIVAL 2018 at Ahmadabad and Vadodara. The inauguration event marks the beginning of nine days of  Garba dance where the entire community participates to celebrate feminine power of Goddess Shakti and her nine incarnations.

If you happen to be in Gujarat during Navaratri, the opening ceremony of festival at Ahmedabad and Garba at Vadodara is not to be missed.

The Bangles released the song “Walk Like An Egyptian” in 1986… Had they seen folk dance during Navaratri celebrations, I am sure they would have changed the song to ‘Dance like a Gujarati’.

One has to see the enthusiasm and energy displayed during the dances to understand the festivities.

Every year nine days of Navaratri are celebrated throughout the country when Goddess Durga is worshipped in various forms. The Bengalis celebrate the Pujo with great pomp and show as do the people of Gujarat.

The grand scale of celebrations at Ahmedabad and Vadodara left me literally jaw-dropping amazed (I haven’t visited West bengal for Durga Puja yet hence can not comment about the celebrations there). The festival inaugurated by Honourable Chief Minister of Gujarat Mr Vijay Rupani set the tone of the celebrations for the next few days.

Mythological stories were presented as dance-drama and folk dances to various devotional songs was just the tip of the grand festivities.

Here is a glimpse of the inauguration event:

If however you are in Gujarat during Navaratri then a visit to Baroda’s UNITED WAY Garba is a must do. The Gujarat Tourism department hosted me and made it possible for me to attend the grandest Navaratri celebrations.

With as many as 60000 people attending the nine day dance frenzy every year, the UNITED WAY Garba has found itself in Limca and Guiness Book of records. No stampede, no eve-teasing and no intolerant skirmishes….just a happy congregation of dance enthusiasts.

Good to know facts to attend this grand dance:

The United Way Garba began in late eighties as a non profit organization and has been supporting various social activities. Besides the upbeat atmosphere that envelopes everyone in its embrace, the Garba ground also becomes a showcase of colorful attires for both men and women; each outdoing the other.

Here are some moments from the United Way Garba that describe the bonhomie and gaiety more than what the words can do:

A woman swirling away to beats at United Way Garba, Alembic Ground , Vadodara 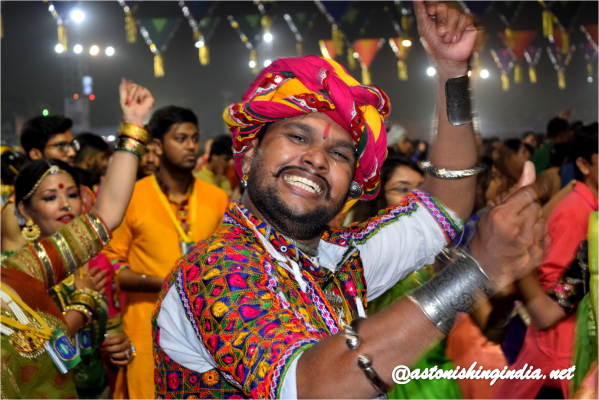 Men dance away the night in colorful clothes too 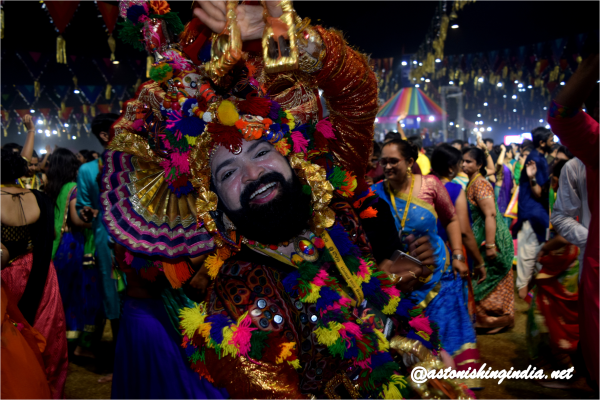 As always the celebrity singer Atul Purohit crooned away the devotional songs while people sweated and danced till midnight. With this being most awaited event of the year, men and women practice almost for a month to get in the groove. And yet not many need to practice at all.

A 25 year old man commented “The moment we step into the circle and music begins, the dance just happens. No need for practice…its just there in me”.

I am one with two left feet and cannot dance even to save my life! but such was the energy and coordination that I couldn’t take my eyes off. Age and gender is no issue and I saw men and women from 60 years to children all mingle in unison to celebrate. 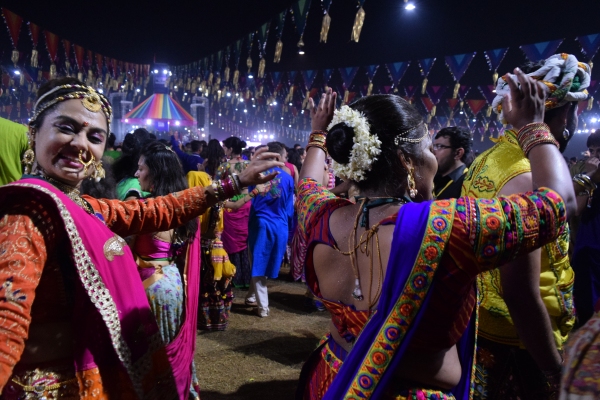 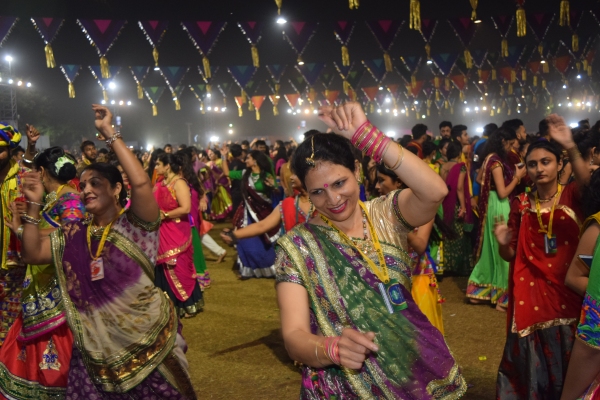 Men women of all age dance to the devotional songs

This little girl stole my heart. She was happy to pose for the cameras.

Other attractions of Vadodara:

Ahmedabad which is well connected by road, railways and air to all major cities of country has quite some heritage worth visiting.