An Unfinished House Of Prayer

Whenever I have visited any place of worship, a sense of peace has prevailed…. I can hear my heart beating, the rhythmic breathing and my brain clock ticking. I have realized I can ‘talk’ to ‘HIM’ to my heart’s content when I am inside a place of worship….but I usually avoid the time of the day when other devotees throng to the temples or churches…somehow I find it not favorable for my calm.

I have been to many churches…the silence in churches sort of envelopes you, automatically inspiring one to talk in hushed tones….the high Gothic arches and ribbed ceiling tend to echo smallest of sound which reminds me to lower my usual boisterous voice. The church, that I walked into in October two years ago was however, different. The 123 years old Episcopal Church of St John the Divine is still incomplete!

Located on Amerstdam Avenue the construction of this church began in 1892 but could never be finished. With an interior area of 121,000 square feet, the cathedral is the fourth largest Christian church in world. It has been nicknamed ‘St John the Unfinished’. 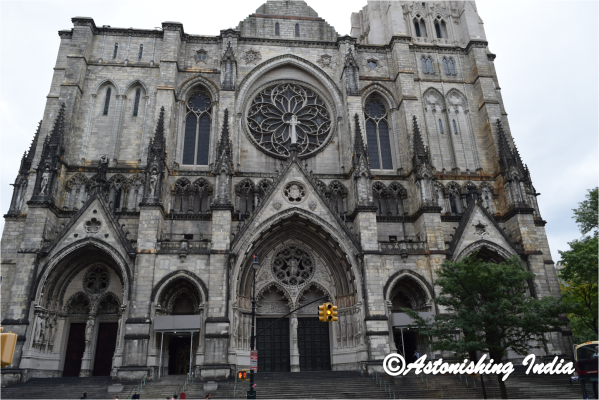 They at church, told us that the funding, for now,  is directed to service of community. Some part of the Cathedral was destroyed in 2001 due to fire in the north transept but the church was reopened in 2008 after renovation.

Of all the churches that I have visited, this was the only one where I saw statues of world leaders who had visited the church, on the pulpit walls… Mahatma Gandhi, His holiness Dalai Lama, Nelson Mandela, Abraham Lincoln, Vasco de Gama,…I could identify these many. Can you identify some more?

Mahatma Gandhi, a visitor once to the church, finds himself on pulpit’s parapet

The cathedral was hosting a display of two huge birds; a pair of Phoenixes, male Feng and Huang the female fashioned out of salvage and architectural debris from construction site at World Financial Center, Beijing, that were exhibited in the soaring nave of the church.  The birds are the brainchild of internationally acclaimed artist Xu Bing.

Built in architectural style of 13th century high Gothic of north France, this cathedralhas longest Gothic nave in US an at the end of nave is a beautiful circular Rose window made from 10000 pieces of colored glass. It is largest in US installed by stained glass artist Charles Connick.

No doubt the light that filtered through the beautiful stained glass windows created a mystic aura in the church and held me spellbound. Longest nave in US

The Cathedral and its surrounding gardens and buildings in 11 acres are collectively called as The Close and is the site for annual St Francis Day fair. ‘The Close’ comprises of Pulpit Lawn, Peace Fountain, Biblical Garden and the Cathedral gardens. The exterior of the church was equally adorned with figures of angels and saints. Saints on exterior walls of church

I wasn’t quite ready to leave the church and wanted to see more of it but it was not to be then.  Aroma wafting in from few cafes and restaurants near the church, the Hungarian Pastry shop tempted me no end but the tour bus arrived at the stop almost at the same time as I reluctantly finished the church tour….

In a foreign place for the first time I chose to skip the shop and head back to the familiarity of the hotel room.