A city wears its attitude on its sleeve…New York flaunts it.

And I was one wide eyed tourist on her first trip abroad….my city seemed dwarfed compared to that steel and glass opulence which greeted me. I visited the United States Of America during Obama’s Presidency, a day after Prime Minister Narendra Modi’s speech at Madison Square Garden, New York. The general vibe of the city was quite upbeat…people were friendly and India was trending….the dark cloud of any hate crime and racism did not hang low….

‘The Big Apple’ or ‘NYC’ are but a few nicknames that are popular for this ‘City that never sleeps’, New York, the most populous city of the United States. Though at mere mention of the city the image that the mind first conjures up is that of the Statue of Liberty or Empire State building or World Trade Centre… all of these are in Manhattan which is but just a part of the widespread city.

Located on one of the world’s largest natural harbors, New York City consists of five boroughs Brooklyn, Queens, Manhattan, The Bronx, and Staten Island. These were consolidated into a single city in 1898. Earlier named as ‘New Amerstdam’ by the Dutch Republic colonists in 1626, the city got its name ‘New York’ only in 1664 after it came under control of English and was gifted to Duke of York by King Charles II of England.

I had three days at my disposal for New York and I wanted to cover as many touristy things in the visit as possible. Every day for the next three days I would board the subway and head to New York. Taxis were expensive so I would walk till the Times Square and board a city tour bus which took me on a guided tour to Bronx, Brooklyn and Manhattan on different days at different times. The day would end back at the Times Square.

While I was on the bus tour, the other areas of the city seemed calmer….comprehensible and one I could relate to. Brooklyn borough had an oldish charm. I thought I recognized a street from Hollywood movies… 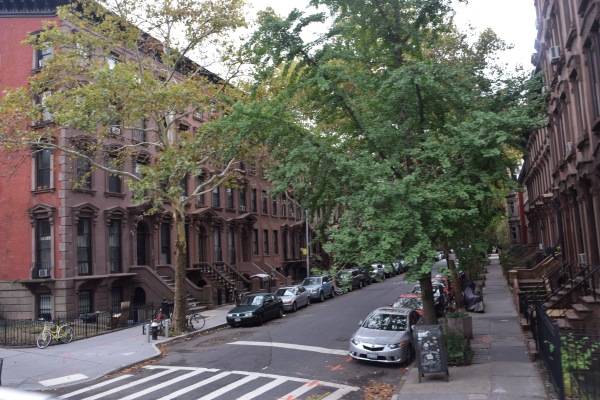 Do you recognize this street from Hollywood movies? Most of the films and television shows usually shoot in that street. If I am not wrong, this is the same street shown in the current season of television series ‘Homeland’.

Brooklyn was connected to Manhattan by a suspension bridge, oldest of its kind in 1838. The Brooklyn Bridge still stands strong spanning the East River. 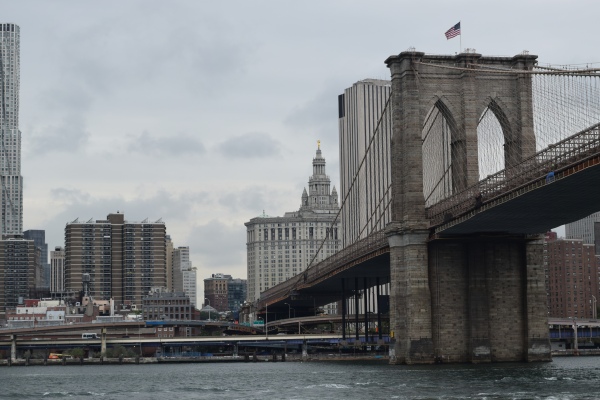 Manhattan borough of New York is much grander in scale than any large city in India…larger than life that I have had all these years in my own country…the glass sky scrapers rise up high and blot out the sun…the soundscape of the city with never ending rumble, hum and buzz(no honking horns though) of cars, taxis, buses, trains, airplanes, boats and people talking animatedly on their cell phones is exhausting and you realize it only after you are back in your hotel room with glass window blocking the street noise…

Being the hub of all commercial and administrative activities with Wall Street and world’s two largest stock exchanges, New York Stock Exchange and NASDAQ, it was Manhattan which was the busiest and crawling with people of all shapes and sizes, of varied nationalities and tourists.

Most of the world famous structures of New York are in Manhattan…you name it and it is there…World Trade Center, Empire State, Rockefeller Center, Chrysler’s Tower, Macy’s Department Store, Headquarters of United Nations… The Fifth Avenue, a major thoroughfare, is the world’s most expensive and best shopping street with large stores of the likes H&M, Rado, Prada, Gucci, Armani and many more. 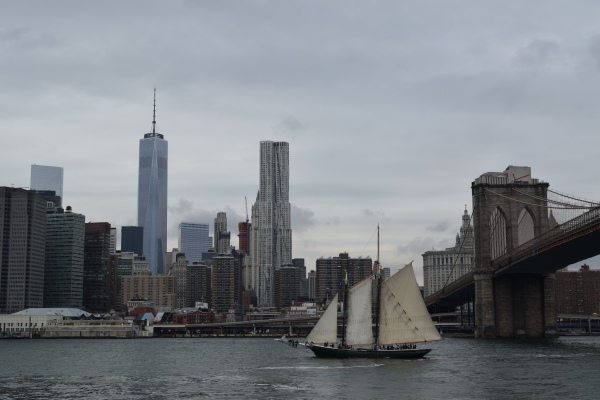 Victory tower and the Manhattan Skyline

A plethora of museums are located in Manhattan including Ripley’s Believe It or Not, Madame Tussaud, MOMA for modern art and my favorite Guggenheim Museum…favorite because it was among the contemporary architectural buildings that was part of my curriculum in college.

College days revisited with a view of Guggenheim’s Museum

For three evenings, I returned to Times Square to find Empire State building lit up in different colors. The frenzy at the square, the uncountable lit up billboards (I actually tried counting number of boards before giving up), the sea of people and rushing vehicles…there was a strange madness at Times Square which one has to see to believe…

And yet amidst all this mayhem was the Central Park, where cyclists, joggers and dog walkers could go on without being bothered by traffic, couples walked past hand in hand and I sat giving my feet a much needed break.

The iconic Grand Central Railroad Terminal holds on to its historic status, here in Manhattan too.

Even with so much to see on such a grand scale and size…the opulence, the massiveness…I did not fall in love with this much loved city…but that is another story to tell. And yet I have much to write about my three days in ‘city of dreams’…this is just the beginning.