Siddis: A Tribe Lost In The Pages Of History

What are the chances of meeting an Afro-American who can speak Hindi, knows which part of the country Indian prime minister hails from and claims to have a great grandfather from Gujarat too? I would say none except that I met someone just like that on my maiden trip to USA at Times Square, New York, of all the places!

I had then, laughed off his claim as a gimmick to get friendly with us and sell the city bus tour package.

A year later I was at the inner gate of Gir National park that led to safari trail inside and there in the thick of jungle was a cluster of brick and thatch huts solely occupied by what seemed like a group of Africans.

At the resort that evening, I was surprised to see bare torso fire-breathing men, dancing to drum beats and some strange words that had only faint semblance to an African tribal music. They had their black faces painted in red, blue and white zig-zag lines; heads crowned with straws sticking out of a mosaic print blue bandanna and wore a matching blue mosaic print skirt. 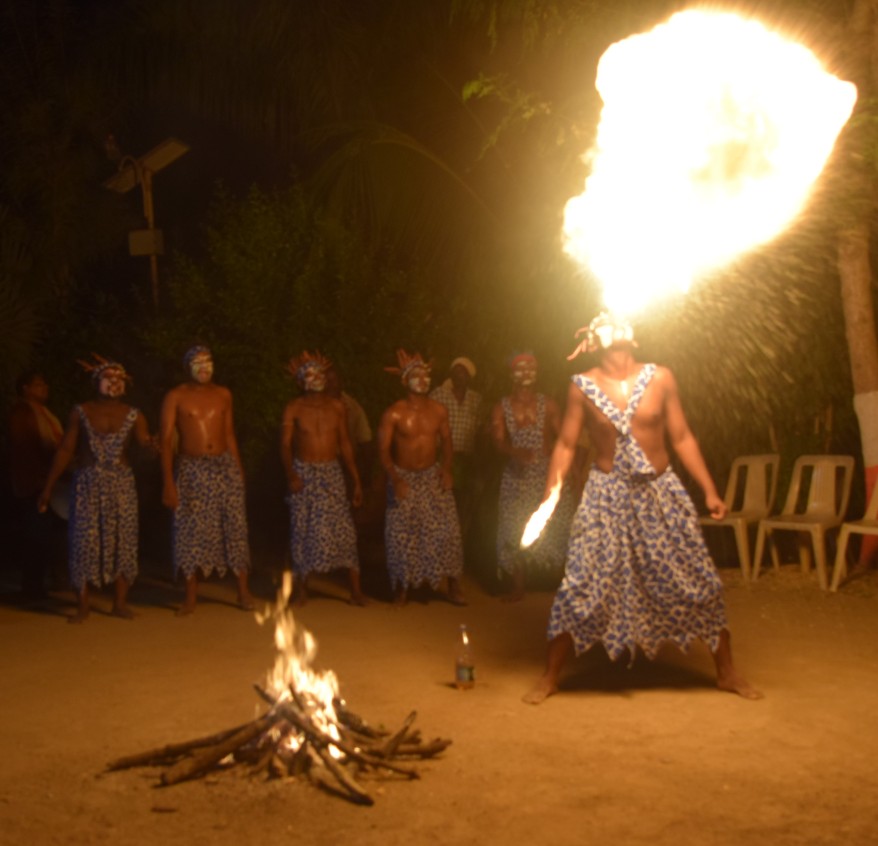 Those men belonged to a Siddi tribe with its roots in Africa. Settled in a small village, Sirvan, skirting the only abode of Asiatic lion at Gir national Park, they lead an obscure life doing odd jobs as drivers, mechanics or labourers coming in limelight only during tourism season of October to June when they are asked to perform by the nearby resorts to entertain the guests.

“This is our fourth generation born and brought up here in Gujarat” Hamza, a young performer told me when his group was performing one evening at the resort.

With only their physical features reminding them of their ethnicity, all families of Sirvan village have completely adapted to Gujarat, eating Gujarati food with as much relish and communicating in local language as much fluently. Separated from their roots for more than three centuries, they strive to keep their music and dance rituals alive but now it has only little traces of the Goma Music of Africa. The dance performances at the resorts seem more like buffoonery meant to elicit laughter and that extra fifty or hundred rupees tip from the tourists and most youngsters of the tribe do not even know the meaning of the certain African words of the songs they dance to.

Siddis, descendents of Bantu tribe of Africa were also called ‘Habshis’. The term may have been derived from Al-Habsh, Arabic for Abyssinia. They were brought on Indian soil as slaves and soldiers. Some Siddis broke the shackles of slavery to establish their small provinces in some parts of Maharashtra, Hyderabad and Karnataka. The Siddis residing near Gir Forest are the descendents of slaves brought by Portugese for the Nawab of Junagarh. The members of this tribe settled now in different parts of India still struggle today to call a piece of land their own.

As he went about collecting tips from all the guests at the resort that night after the ‘Goma’ musical dance and fire breathing performances were over, Omar the wise elderly man of the troupe commented as a matter of fact “History has forgotten us…”

I sat wondering about the complex relationship of these original expatriates with India….As if reading my thoughts he joined his hands in a last Namaste of the evening and told me simply…“There is nothing for us in Africa now…India is our country; it is our home and all our people are here!”

Roaaaaarrr!!
#noediting #westernghats #monsoonseason #maharashtra #landscapephotography #rainyseason☔️ #backyardtourism #maharashtratourism
Meet Chandrakala Verma from Alanpur village, Sawai Madhopur, Rajasthan.
Is that leopard?
In conversation... Discussion ranges from climate change to impact of too much interference of two-legged-animal in noisy motor driven machines in their habitat.
Hundreds of Ghariyal try to survive after hatching at the river bank of Chambal and the fittest survive...that is the law of nature.
ROAR...YAWN...ROAR
At #Sariska be ready to spot monitor lizards, crocodiles, birds, leopards and tiger!
At #siriskatigersanctuary , i had luck by my side with the #tiger sighting. Only this time it was an adult, ferocious and swift.