The  first soft yellow light of the early morning fell on the face of the gold idol of Surya, imparting a resplendent glow shattering the darkness……It seemed as if the Sun God himself emerged from the sleepy confines of the garbha griha of the temple riding his golden chariot heralding the dawn of a new day. The priests began their chants extolling the Lord of Light and Life….bells rang in a synchronised pandemonium urging the town people to finish morning ablutions and join in the prayers.

The temple was so designed so as to allow the first rays of the solstice sun to fall on the gold idol and chariot of the Sun God. The pomp and affluence of the kingdom had spread far and wide…as far as the rays of that very Sun, to whom the temple was dedicated. It was rumored that not only the idol and the chariot were of gold but it hid a chamber which was filled with gold coins and precious gems of unaccountable value!!

Allaudin paced up and down in his chambers….”So much of gold…lying there under a statue? It is a waste…. Those men do not deserve such extravagance…Me…. I am the superior one….it is meant for me!!”

Allauddin Khilji attacked the Solanki rulers of Gujrat and plundered the Sun temple at Modhera. The second ruler of the Turkish Khilji Dynasty knew that the Hindus did not worship a broken idol or temple. He struck hard, defacing all the idols of Gods and Goddesses of the temple….desecrating the holy complex….that made it easy for him to loot the wealth hidden in the temple.

Centuries later the huge temple complex built by King Bhimdev I in AD 1026, lies in ruins still telling a tale of immense wealth, affluence and grandeur of the rulers who stood against invaders many a times regaining some of their power and splendour but later weakened due to frequent invasions by Mahmud Ghazni, finally succumbed to the military prowess of Allauddin Khilji.

In Ahmedabad for just two days for some work, I succeeded in persuading my reluctant husband (he chauffeurs me around always when I get this urge to wander in these architecturally rich historic ruins, poor chap!!) when all he wanted to do was relax and sleep! But he conceded because the possibility of us being in Ahmedabad again within next few months was quite less and also because he loves to indulge me 😉 (Bless him!)

Me with my camera…all covered in along scarf!!

The temperature in Ahmedabad had shot up to 43 degrees at ten in the morning in first week of june, but with full sleeved clothes, scarves and hats on, I dragged everybody to Sun temple at Modhera…. I felt at peace and less guilty when my daughter exclaimed “Its beautiful, mamma“

The temple complex is indeed a beautiful example of architecture and finesse of sculptors of those times. The many small and large statues of Gods and goddesses on the exterior walls of the temple are exquisitely carved out of sandstone.

We hired the services of the lone guide who had only little knowledge of the history and could not throw much light on the events leading to the fall of the Solanki Dynasty. He had learnt the history part to some extent and if I interrupted him, he would start all over again. With a quick tour he left us to take pictures and because he could see other visitors trickling in who seemed less nosy than me!!

The lawns around the complex with frangipani tree in full bloom was very inviting with the sun beating down on us but we chose to take a quick round of museum within the complex. Our energies were sapped enough and nobody was interested in more history and architecture…we piled back in the comfort of cool car and headed back to our room.

Plan of Sun Temple at Modhera (image via wikipedia)

Situated on the banks of now almost dried up river Pushpavati, the temple complex has three main parts…. the water tank ‘Surya Kund‘, the ‘Sabha Mandap‘ or the hall of gathering and ‘Guda Mandap‘ the sanctum sanctorum….all aligned along an east-west axis.

The Hindu practice of worship calls for cleansing of body before entering  a place of worship. The temple plan incorporates a huge water tank in front of the main temple also called as ‘Surya Kund’ or ‘Ram Kund’. The tank has many steps like the stepwells of the times and 108 small temple shrines along the perimeter. The ambulatory path along the four sides of tank is for ‘Pradakshina’ where the devotees can move in a circle around their God to denote that the Lord is omnipresent.

The Kund or the water tank also alludes to the Vedic belief of the sun emerging from the dark inertness. The tank is the water altar. The steps, cascading down in a inverted triangular form, are so made as to mirror the rising ‘shikhara’ or the pyramidal top of the temple.

The ‘Sabha Mandap’ is where people gathered for prayers and dancers performed as an offering to the Sun God.

The two huge pillars just outside the sabha mandap were once adorned by an archway ‘Toran’ atop them. It was in practice then, to demolish the ‘Toran’ of the palace or temple of defeated king by the victorious king to denote subjugation.

This structure has 52 intricately carved pillars each depicting scenes from the two great Hindu epics the “Ramayan” and “Mahabharat”. The number of pillars denote the 52 weeks in a year. All possible surfaces are decorated with small and big figurines.

The main temple ie the sanctum sanctorum or the ‘Guda Mandap’ has plainer inner walls and the pyramidal ‘shikhara’ of the temple is ruined. The external walls are decorated with 12 large idols of Sun God riding his chariot of seven horses. The twelve idols represent the twelve months and the seven horses of the chariot represent the seven colors of sunlight. 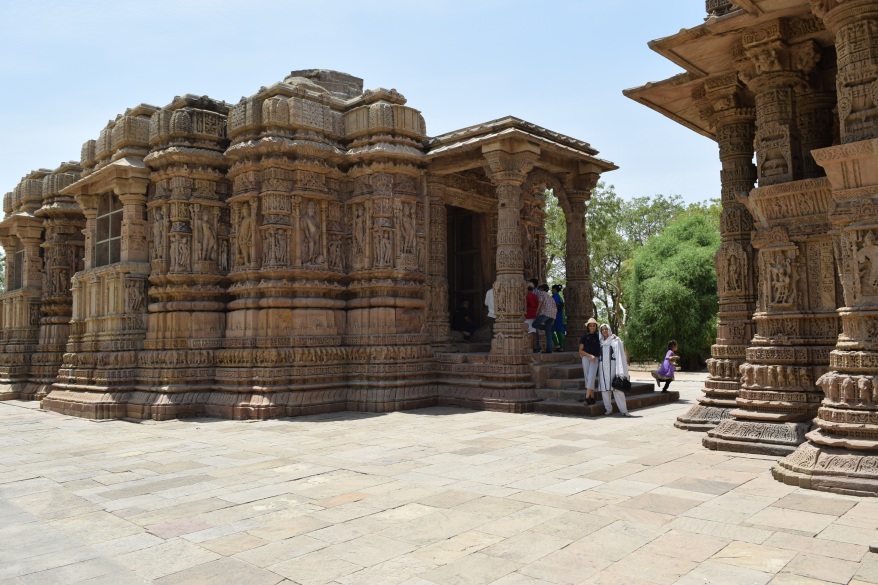 There are few other temples dedicated to ‘Surya’ the Sun God in other parts of India, the most famous being the Sun Temple at Konark in form of a chariot. Ruins of another large temple dedicated to Sun are located at Multan, Pakistan.

Location: The sun temple at Modhera is about 102 km from Ahmedabad, Gujrat.

Getting there: It takes about two hours to drive via Gujrat State Highway 41. The drive is comfortable with wide and well maintained roads. Taxi services are available within the city for pick up and drop. A minimal entry fee is charged at the gate to the complex. The ASI(architectural survey of india) maintains the ancient structure.

Stay: Though  we stayed at the Officer’s Mess Accommodation of Indian Air Force, but Ahmedabad has many budget as well as luxury hotels to boast of. Local food tends to be little sweeter, however multicuisine restaurants are plenty.

Bhangarh Fort is popular for being haunted. But the entire complex was once a well planned town. Rising up in multiple stories, of which only two survive, with a gorgeous green hill as the backdrop, the fort ruins feature rows of small rooms which once was a bustling market place leading right up to the gates of fort. Temples and residential units showcase the hierarchy of important members of the then society.
So here is the burst of photographs I was talking about the other day.... I gave my mobile for one picture to other person on boat and he went all trigger happy...
I wish I had someone to do some flattering photo shoot for me once in a while. Handing over your camera or mobile to guides or someone in the crowd doesn't help much 😅
#landscapephotography #backwaters #panshetdam #maharashtra #backyardtourism #instalandscape #instatravel
I am the river...
Enroute to Panshet lake for a quiet day outing.
Fifty shades of Nature #landscapephotography #landscape #fiftyshadesofnature
Reflections of life... #reflection #landscapephotography #kaasplateau #kaas #kaaspathar #plateauofflowers #unescoworldheritagesite #landscape #treephotography #reflectionphotography #reflectionphoto #picoftheday #shotoftheday #instalandscape
#kaasplateau #plateauofflowers #unescoheritage #fragilelandscapes #landscapephotography #smithiahirusutaflowers #picoftheday #nofilter #unedited
Travel far and wide but let not #pandemic travel with you #staysafe #mindfulness #travelsafe #wearmask @thewomen_impact