At two and a half hour drive from Ahmedabad, stands the largest and most decorative Rani ki Vav, an ancient step-well recognized as UNESCO World Heritage site since 2014, at Patan in Gujarat. From a distance it looks like a massive cavity in the womb of earth in the middle of a well-laid out lawn until you descend the steps and see the most ornate stone structure there is with every inch richly carved with delicate designs. Given its dimensions it is indeed an architectural and engineering feat.

Gujarat, being in western part of the country, has a harsh sun almost all the year round. Driving from Ahmedabad, when I reached this UNESCO site, the sun was overhead blazing in fierce force. I wrapped my face and bare arms with white cotton stole to prevent a heat stroke and avoid being scorched. But as soon as I descended the first tier of the baori to seek shade, the breeze felt cooler and comforting.

So What Exactly Are Step Wells:

Simply put, step-wells or Baori or Vav are subterranean or underground water tanks with a well that are reached by descending steps.

All across the ancient northern India there was a culture of making these step wells to store and meet the water requirements in hot summers. Delhi itself has many of such step wells, though not as decorated but most of them have fallen to neglect. Some of the other step wells in Gujarat are Dada Hari Ni Vav and Adalaj Vav (read my blog). One of the step wells of Rajasthan near Jaipur, the Abhaneri or Chand Baori (read more about it here) is also a fine example of architecture.

Step wells were built by digging deep trenches with numerous steps to reach the underground water and the walls are lined with decorated stone panels.

These structures mostly have pavilions and passage ways in various tiers gradually descending towards the well and the water tank.

Baoris were built to function as sources of water, utilized for religious and social gatherings and also as resting spots for the travelers.

Rani ki Vav in Patan, Gujarat is the largest and most beautiful step well in India.

It was built in early 11th century(1050 AD) by the widowed queen Udaymati in memory of her husband, Raja Bhimdev I of Solanki Dynasty of Gujarat. With an East-West orientation, the 65m (213 feet) long, 66 feet wide and 92 feet deep step well has seven levels of intricately carved pavilions and passages. The well shaft on the western end is 33 feet in diameter and 98 feet deep.

It took almost 20 long years to complete the baori.

Rani ki Vav is considered to be the zenith of craftsmanship. Having made numerous wells the artisans and sculptors had refined their skill to make such an ambitious size of the step well.

Built in Maru-Gurjara architectural style, it is often referred to as an inverted temple owing to its decreasing size as one moves downward and the plethora of sculptures adorning its every nook and corner.

Scientific logic was well employed in the construction of the baori. The east west orientation of the step well allowed breeze to cool the pavilions while keeping the harsh sun away. With the water shaft at the western end, the water in the well also did not get direct sun thus allowing the water to remain cooler. The first three pavilions were used for public gathering while it was only the fourth level of pavilion that led to the water tank.

The walls, beams and columns of the step well are adorned with more than 500 elaborate ornate sculptures depicting many mythological and religious stories. There is even a image of Hindu God Vishnu reclining on Shesh Nag the celestial snake on the wall of well shaft.

The central theme of the Vav are the stories of God Vishnu and his ten incarnations on earth told in “Dashavatar” that are depicted on the walls of Rani Ki vav in great detail on large panels accompanied by almost 1000 minor sculptures of sages, celestial nymphs or Apsaras, Gandharvas.

Besides the sculptures that dot the walls columns and beams, there are numerous patterns etched on panels that literally look like embroidery on stone. These lace like patterns also are traditionally incorporated in the Patola Silk Saris that Patan is famous for.

Lost In Sands Of Time:

Rani ki Vav was built near the ancient Rigvedic River Saraswati. A devastating deluge and the changed course of river buried it in the debris and silt for centuries to come.

British archaeologists Henry Cousens and James Burgess stumbled across the well shaft and few pillars peeking out of silt and sand in 1890 and called it a large pit. More excavations under Baroda state in 1940 revealed the huge step well. However it was only in 1986 that major excavation and restoration was undertaken by Archaeological Society Of India (ASI).

It was due to this silting however that the entire structure was preserved over the centuries until excavated.

Ganesha and other celestial figures 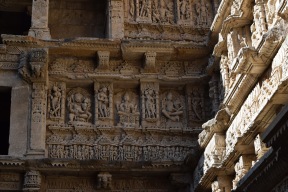 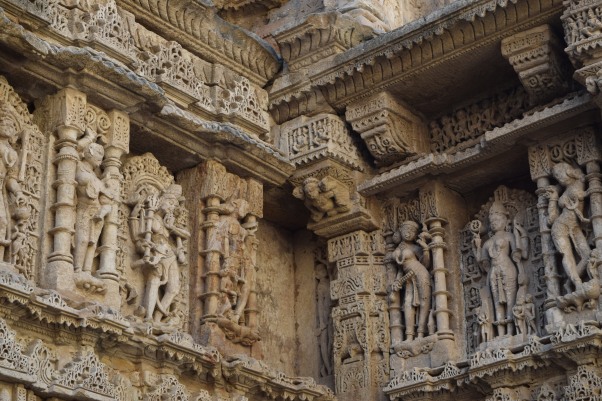 Sculptures at one corner of vav 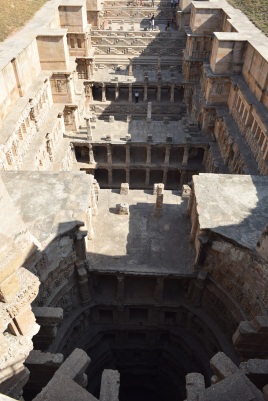 Well shaft and tiers of Vav at eastern end

Things To Know While Visiting: 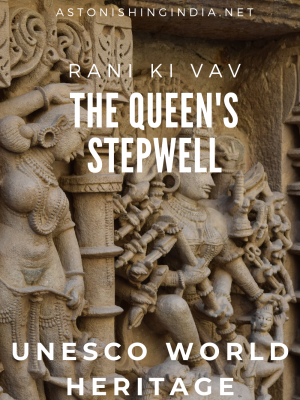 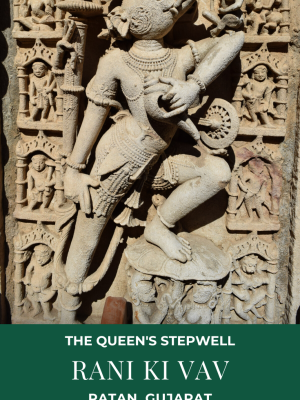 Cathedral at Granada piercing the sky
La Alhambra palace gardens at Granada, Spain have distinct features of Islamic layout. The Cypress trees that are revered in Islamic culture are abundant in the gardens and the La Alhambra old town.
Inspired from Velázquez’s “Las Meninas” painting and as a tribute to the great artist, these sculptures of Las Menina or the lady in the waiting are installed at various public spaces.
Hola Espania!!
Just like that...
My photo shot of #siliserhlakepalace on the official website of Rajasthan Tourism Board for #Alwar tourism
I met Pluto in Himachal Pradesh. A very calm dog with a royal Air about him. The owner warned me to not try to pet him or it may bite.
Every time I go to #Mumbai, I try to go to Churchgate for a #rustomji icecream.
Into the sea...
Caught a good sunlight for photography. It was little nippy in the morning when we were vacationing but I love how the rocks take a golden hue before the sun completely starts blazing at #butterflybeach , #southgoa #sunrise #sunrisephotography #beaches #beachphotography #rockybeach